Last night the Cavaliers swung into action with unexpected intensity and precision like seditious Brazil air-conditioner repairman Harry Tuttle. Coming off a disappointing home loss to the Houston Rockets on Tuesday and a loss to these same Nets this time last week, the Wine and Gold showed up and took care of business with a minimum of sweat, anxiety or excess paperwork.

Instead of Lopez, the Nets started former Cavs project/stiff Henry Sims. We’re talking 76ers region here. (Though like the 76ers, they played hard, if poorly.) It is what for most teams would be a formality, but for the Cavs it’s an adventure anytime they play a bad team. Will they show up?

They certainly did last night. Well, excluding the first eight minutes. And that’s the thing isn’t it? Even in a game that they dominated, the Cavaliers got off to a lame start and, cruised through a second half where, honestly, they were as much beneficiaries of the Nets porous offensive abilities as any remnant of the Cavaliers outstanding second quarter defense.

“I thought the first half we played good defense, just coming in, looking at it, and watching it. I thought our guards tried to get into the ball, and our bigs were in great drop position to contain Larkin in the pick and rolls,” said Coach Tyronn Lue. “In the second half we took a step backward. We started messing around with the game, taking short cuts. There may have been some shots where we got lucky but in the first half we were way better than in the second half.”

The Good, The Bad and The Ugly

It was nice to see the Cavs spark their offense with their defense, if only so they know it can work that way. They had four steals and four blocked shots, while holding the Nets to 26% shooting, helping them to outscore the Nets 34-17 in the quarter.

It was nice to get an expected win in a game the Cavs led for nearly the entire game. We're sorry to rain on the parade, however for as dominant as they were in one stretch of the second quarter, they didn’t sustain it all game. Indeed, at times they looked like they were coasting. The Cavaliers only shot 38% in the second half, while the Nets shot 43%.

In homage to the Cavaliers schizophrenic nature, we’re treating them like Schrodinger’s Cat. They showcased the type of fierce, hardnosed pressure they’ll need against “real opponents” during a 27-6 blitz over the final 7:30 of the first half.

While the Cavs held (and for this stretch we mean it) the Nets to 2-15 shooting, they went 8-13, 3-6 from the 3 line and shot 8-10 from the line with six assists. (It’s magnificent any quarter they take more free throws than threes.) It’s probably not surprising that all four of the blocks and one steal occurred during this one incredibly good period of defense.

Yeah! They turned it on! The half-full Dr. Jekyll feels this is just great, and it’s hard to really get up for crappy teams like the Nets. Kyrie Irving and J.R. Smith were sick in shootaround, but wanted to go. They finished 7-22 and 2-12 from 3 collectively. (The rest of the team was a more conscionable 31-65 from the field and 10-26 from 3.)

In the postgame Lue bravely admitted that he thought about resting Irving and Smith, but they “wanted to go.” Say what you will about what the players do on the court – as we saw with Blatt there’s only so much a coach can do about what they run – but the one thing a coach can do without question, is decide who starts and who sits. On the front-end of a back-to-back it seems foolhardy to say the least.

"We wanted to come out and take care of this team early and try to have our legs for tomorrow night’s game," Lue said.

The Cavs turned it into a moot point with that 27-point seven-minute burst. We're certainly glad it didn't go the other way. In the end both Smith and Irving played just 24 minutes. We hope they are able to give a good go tomorrow in Atlanta. The Hawks are peaking at the right time, winning 8 of their last 10, better than anyone in the East.

As we noted the other day, the Hawks bench has put up the best net differential in the NBA since the break. The Cavaliers are second.

Things weren’t going very well in the first quarter until Irving checked out. There. We said it. When Delly is on the floor, almost miraculously there are multiple screens, the ball moves and even finds the other side of the floor.

After a little bit of lackluster play during part of March that may have been the long-lingering hamstring issue, Delly’s picked things up of late just with his savvy leadership. It isn’t his shot. (He’s shooting 32% from the field, 30% from 3 over the last ten games.) It’s about his stewardship. In those last ten games he’s had 7 or more assists three times.

On this play he caught LeBron just as he came off a beautiful J.R. Smith screen that sprung him for an open cut directly under the basket where Delly found him for the “and 1.”

When the ailing Irving checked out with four minutes left in the first, the Cavs had just taken the lead 15-14. The Cavs made five of their next six shots, three assisted by LeBron, two by Delly. Four different players scored including a pair of threes by Channing Frye (bouncing back from a bad stretch with 13 pts, 8 boards and 2 assists) and one by J.R. Smith.

In the second, Irving couldn’t get much going with the second team, but only lost those first four minutes 11-9. When LeBron, Love and Smith checked back in, things changed almost immediately. Love and James scored eight apiece. Perhaps most amazing was the fact that Timofey Mozgov was a significant part of the run contributing two buckets and a couple free throws, as well as a block.
Love finally hit some threes (4-8) and made 3-4 from the line so it looks like he had a productive night (19 Pts, 10 Reb). He was efficient, but we’ve seen him shoot poorly from 3 (29% since All-Star Break) for long enough to feel there’s probably little chance this is the turnaround game everyone's talked about at least a half-dozen times this year.

That said, we were encouraged to see Lue continue to slip more plays utilizing the Big 3 in sets, with Kevin Love at the elbow (!!) as the trigger on a LBJ/Kyrie baseline screen that ended in a Mozzy slam. 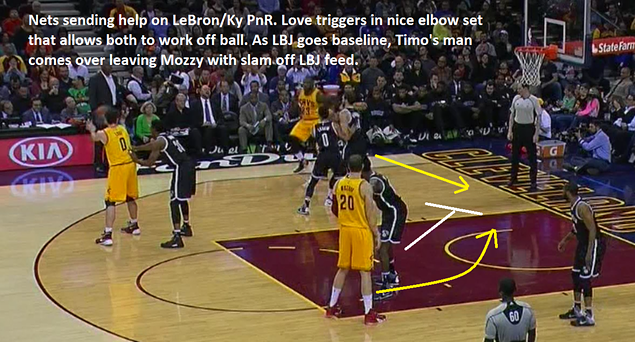 We also saw a lot more of LeBron working off the ball, receiving a wonderful pass from Delly (who else) as he followed Tristan Thompson’s roll through the lane with his own cut. Thompson was like a fullback soaking up lane defenders, giving LeBron a clear runway.
After blowing out to a 23-point halftime lead, the Cavaliers relaxed in the second half. They weren't bad, but they didn’t have the same intensity.

The Cavs are a drive-and-kick team, we know. But we still wonder if live-by-the-three-die-by-the-three basketball will be effective in the playoffs. While we appreciate it’s a little easier to watch than the series of PnRs and ISOs that our offense used to degrade into (and still does, with decidedly less frequency, especially if pace stays up), we just don’t think you can rely on jumpers in the postseason.

Last night they also went downhill and got to the line. At least in the first half. It’s not hard to believe they only took four free throws in the second half, because they didn’t play the same way.

"I thought the guys did a good job in the first half," Lue reiterated. "The second half I thought we messed around a little bit."

The ball did move and there was good passing almost the entire game, so for those half-full fans, that’s what you can take from it. Getting 29 assists and 10 secondary assists on 38 baskets is very good.

We just want them to continue to attack the basket and close-outs, not just settle for open 3's. The Cavs only shot 44% on uncontested shots, despite getting 150% more (52 versus 35 contested shots, on which they shot 43%).

Not Making the Transition

They’re 19th in allowing pts/transition possession, which is why Lue desperately wants the team to score and force opponents to take it out of the basket – it doesn’t expose the transition D like long rebounds do.
It wasn't a great win, but it was good enough for a Cavs team that feels pretty good about itself. ("Ruh-Roh, Shaggy!")

"With everything surrounding our team it’s crazy to think we’re still in first place and we’re still the team to beat, honestly, regardless of what anybody else says," Irving said, presumably referring to the Eastern Conference Crown and not the NBA title. "I have a lot more confidence than I think people realize with what is going on with our team and in our locker room."

Given the Cavaliers predilections toward drama and inconsistency, a boring win is satisfying like a Snickers Bar. Yeah, great a win. About 30 minutes later after the sugar buzz wears off, you’re back where you started. Who are these guys?

Nobody knows. Even the coaches. In this terrific Zach Lowe article, Cavs assistant coach Jim Boylan is quoted saying “People try to identify what we are as a team, and it's not even clear to us.”

While the team’s rollercoaster play empowers thousands of ersatz Frazier Cranes to offer their beer-soaked second-hand analysis, the fact that it’s stumped even those closest to them speaks to the utter inscrutability of this team. These Cavaliers defy explanation by anyone short of Navajo Wind Talkers in league with Miss Cleo.

Luckily, Kevin Love's around to explain it: "We maybe played down to some teams and lost some tough games but we’re still very talented," he said. "We still have the ability to do great things and we have a very talented team that can lock in."

Well, maybe for a half against a crappy team. But we also saw them look like hot garbage against the same team seven days ago. Which team is it? Do they even know?

Can Cleveland lock in when it counts, or are they just as blissfully delusional fools like Brazil's Sam Pryce, still believing someone is coming to save him?

The Cavaliers play tomorrow night in Atlanta. They're 10-8 on backends of back-to-backs, and with the Hawks resting, this is prime territory for a Cavs loss. We’ll be watching the broadcast, posting analysis, video and snark. You can follow along with us on Twitter @CRS_1ne and can read our postgame analysis on Saturday morning.