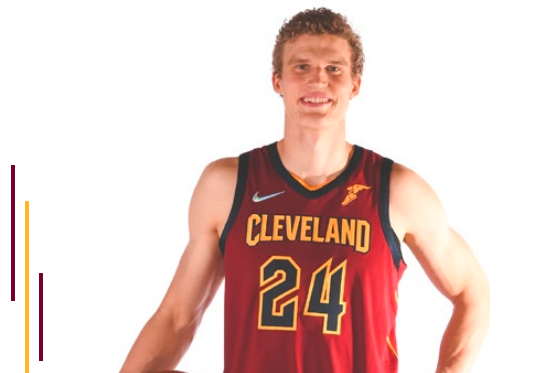 The basketball world was briefly aflutter this week when news broke that Cavs Finnish seven-footer Lauri Markkanen — the Long Drink himself — would likely be required to complete military service in his native Finland.

Cavs fans heaved a sigh of relief, however, when HoopsHype reported Thursday that while Markkanen will indeed fulfill his military obligation — and is proud to do so — he won't miss any games in the process.

“Lauri takes great pride in being from and representing Finland in the NBA,” Markkanen’s agent told HoopsHype. “One of his civic requirements is serving in the Finnish military. He is prepared to fulfill that duty at the appropriate time.”

Previous reporting indicated that Markkanen would likely serve in the Finnish Defense Forces "Sports School," a special unit that allows elite Finnish athletes to continue training in their respective sport as they complete their conscript service.

Basketnews reported that Markkanen was one of 98 athletes, representing 20 different sports, selected for the next round round of Sports School, which technically begins on April 11 at its facility in Helsinki.

Though the shortest term of military service for a pro athlete is 165 days, it sounds like Markkanen has (or will be able to) negotiate some flexibility. That'll be key if the Cavs make the playoffs this year. The rangy young Cavs are currently 14-12, having faced the hardest NBA schedule to date, and would earn a seven seed and a ticket to the play-in tournament if the playoffs started today.

Markkanen is averaging 14.5 points and 5.8 rebounds per game as he continues to triangulate his shooting accuracy. He started the season somewhat unevenly from long range, and missed nine games in November due to Covid health and safety protocols, but is still making more than two three-pointers per contest and is beginning to assert himself against smaller defenders in the paint.