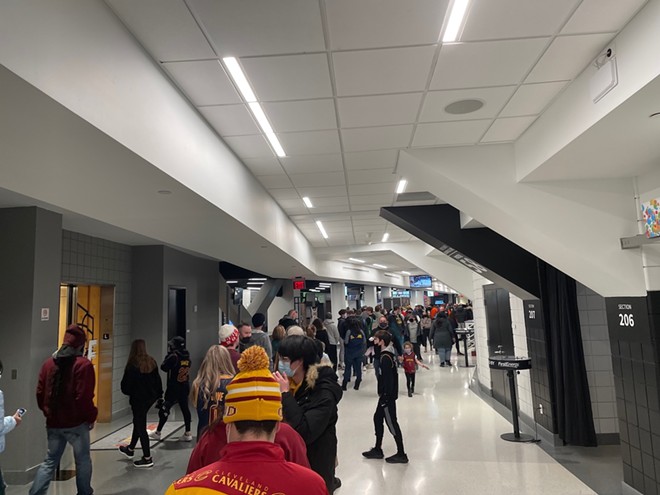 Vince Grzegorek
One of the many, many long lines at the RoMoFiHo yesterday

Fans who dug out of yesterday's blizzard and made the slow, snowy trek to Rocket Mortgage FieldHouse for the win against the Brooklyn Nets will receive free tickets to a future game, the team announced, because a lack of staff left the Cavs without enough workers to open the majority of concession stands.

Only about a quarter or less were operating, and even with fewer fans filling the stands due to the weather, lines quickly stretched, from dozens to hundreds, with no abatement all afternoon.

Props to Cleveland Cavs in acknowledging lack of concessions and negative services. Free ticket to another game. #committedtofans


In addition to road conditions, the staffing issue was likely also due to RTA's decision to suspend all service during the day.

"We were down a significant number of our part-time event staff team members," a Cavs spokesperson told Scene. "Over 50%."

While fans with tickets and cars who showed up will enjoy a freebie on the franchise, no such generosity will be made to the part-time, low-wage workers who couldn't get to work. (While non-union part-time arena employees make an average of $16 per hour, the starting wage for event staff is $11 for the Cavs.)

"Only those able to work yesterday are being paid," the spokesperson said. "At the same time, opportunities to work and garner more hours are way up for our part-timer team members as a result of this season being one our most active ever."