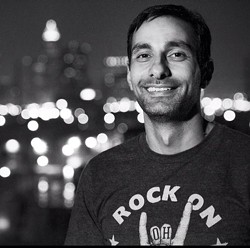 Olivier Sedra Twitter
Cavs fans will be hearing a new voice booming over the speakers at Quicken Loans Arena during games this year. After 11 years behind the mic, Olivier Sedra is moving on, the team announced yesterday. An update made earlier this month to his Wikipedia page says he'll be the public address announcer for the Brooklyn Nets next season.

Thank you @OlivierTheVoice for 11 yrs as the "voice" of @TheQArena. Going to miss hearing "CAVZZZZ BALLL!" Best of luck w/your next venture.

The job is posted, naturally, in case you want to submit your credentials/poorly edited video of yourself screaming at your phone that you uploaded to YouTube.