Cavs Media Day Report (Or: The Night That the Lights Went Out in Independence) 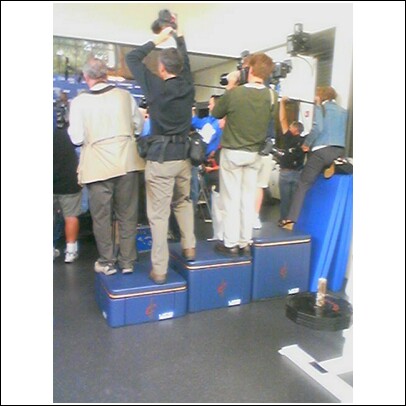 — from an episode of Sports Night

High winds knocked out the power in Independence yesterday, significant mainly because the lights went out in the middle of Cavs media day at the Cleveland Clinic Courts. While this made a convenient and quirky lede for some media members filing their stories, and others joked about the blackout via Twitter, remarking something to the effect of, "How about that for foreshadowing," it's hard for me to not look at the outage as something more.

While it's completely rational to brush the apparent coincidence aside — relegating it to modifier in a phrase or descriptor of the event's milieu — this is Cleveland sports we're talking about, and we're trained to immediately look for any phenomenon that portends failure. A blackout is never just a blackout.

Consider not just that nature's fury — albeit comparatively tame in the grand scheme of destructive natural disasters — struck on the first official day of the season, but that it was also on Yom Kippur. Now, I'm not only not specifically Jewish, I'm also not generally a religious person in any way; but even I, an agnostic, could tell you that holding media day on Yom Kippur couldn't be a great idea.

In case you didn't know, here's the description from Wikipedia (the most trusted source for non-Jewish journalists looking for facts about Judaism): "Yom Kippur, also known as the Day of Atonement, is the holiest day of the year for religious Jews. Its central themes are atonement and repentance. Jews traditionally observe this holy day with a 25-hour period of fasting and intensive prayer, often spending most of the day in synagogue services."

A power outage caused by a storm on the first day of the season, which happens to also be Yom Kippur? Mojo, juju, karma, luck — call it what you will, just put the word Bad in front of it. The Cavs are basically betting the house that the Jews are wrong. If they are doing so because they believe that LeBron isn't just like a god, but God himself, they should know that was all just an ad campaign.

Doesn't matter how much or how little you believe in either side of the argument, I'm just saying that with the stakes for this season as high as they are, it's a bet I wouldn't be willing to make. There is no god I would chance upsetting at this point, not with the Indians festering in a shallow grave and Browns about 18-feet beneath that. You think I'm kidding? I'm re-watching Major League just to find out how not to piss off Jobu. Seriously, anybody have a chicken or a bucket of KFC?

— Speaking of KFC, Delonte was asked whether he had any KFC endorsements coming in the future thanks to his viral freestyling video.

"Oh, you saw that too?" he said to the reporter.

It's as if he thought a dozen people in the whole wide world were the total audience for his "Hot sauce in my bag" riffs.

— When the lights went out I was waiting for a disco ball to be dropped from the ceiling and Boyz II Men to blare from the speakers (I was calling dibs on first dance with Windhorst). The media mulled around. One guy got rookie Danny Green to read a radio promo using a cell phone as a light. One radio station powered its setup with a generator set up in the parking lot. There were voluminous amounts of Browns blackout jokes, although few of them were funny. I saw a stray recorder left on a table where Leon Powe had been fielding questions and thought about leaving my version of "Hot sauce in my baaaag" on it for some lucky, unknown media member.

And then, Shaq was coming. The cavalcade hustled to the workout room, which, blessed with ample natural lighting and workout equipment, would prove a suitable and hilarious location for interviews. Triple or double the throng that was present for Delonte and you'd get the idea of how many people crowded around Shaq — even more than for LeBron, I think.

As I watched grown men and women climb on workout benches, duck their heads under bars tied to weights (I'm real scientific when it comes to gym knowledge), the season was immediately summed up in that visual. Mo was sitting on a ledge with a bunch of other players taking in the scene and a reporter asked him again what he thought. "I could do a whole year of no one asking me questions," he happily responded.

— The attention isn't going anywhere. This is either going to be the most wildly celebrated Cleveland team in recent memory or a devastating and unmitigated failure that drives an entire population to sell the city for busfare to the I-480 bridge. And either way, this is going to be a hyper-intense public spectacle.