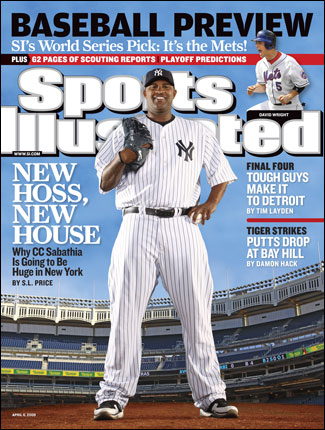 At this point, almost three full weeks into the season, you would think it’s a little late in the game to start hating C.C. Sabathia for signing with the Yankees. But it just struck me, during the Indians’ four-game series at the wind tunnel known as new Yankee Stadium, that as far as his professional career is concerned, he can go to hell.

When the hefty lefty was traded to Milwaukee in the Tribe’s mid-season fire sale of 2008, there was no ill will harbored against He of the Crooked Cap as far as I was concerned. It was the price of doing business. Hell, I rooted for him to toss complete game shut-outs every time he sauntered to the mound. When the playoffs began and my dear Wahoos were off on vacation, I took up Milwaukee as my rooting interest. Good Midwest town. Small payroll. C.C.

It didn’t even strike me as his free-agent negotiations leaned more and more toward landing in the pinstripers’ favor. At that point of the winter, even though he was clearly the largest free agent on the market, the center of $100 million-plus rumors, he was still just another newly minted nomad. These things happen. Kids excel in an organization, sign a long-term contract, and when that last year comes and goes and they’re still on top of their game, they get to reap the rewards on the open market.

It didn’t even strike me when he appeared on the cover of Sports Illustrated’s MLB preview issue. He’s the biggest story of the off-season — clearly it makes sense to plaster his mug on the front of a magazine.

And then the season began, and my indifference quickly morphed into vitriol. After the Tribe’s opening-day loss to the Rangers, I turned on the New York vs. Baltimore game to see C.C. standing on the mound. This was real. This was Belle and Ramirez and Thome all over again, and I was mildly shocked. Maybe those dearly departed members of the Tribe left so long ago that the emotional resonance faded away. Shapiro had locked everyone up to long-term deals. This team had a young nucleus that would be around for the foreseeable future.

And then C.C. took to the rubber in the official opener for new Yankee Stadium against his former team.
He was no longer some free agent. He was the new face of the franchise, a $161-million investment on which this season would be judged.

And his cap was on straight.

Now, I wish him all the health and wealth and happiness for him and his family off the field, but on it, I hope he immediately comes down with Rick Ankiel disease and never throws another strike as long as he plays. No injuries — that would be mean. Just a complete inability to throw the ball for a strike.

And I hope wearing his hat gives him a headache.

Seeing him on the mound against the Tribe was like seeing your ex-girlfriend with her new boyfriend for the first time — and you realize he’s the guy who used to beat you up in grade school. You can barely contain the gurgling rage or your desire for them both to contract herpes.

Well, maybe not herpes. Maybe something curable, like gonorrhea. C.C. can opt out of his contract with N.Y. after the 2011 season, after all.