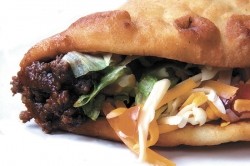 Late in the fourth quarter of the Cavs' game against the Milwaukee Bucks on November 11, the team was putting the finishing touches on a 99-93 victory. With less than a minute to go and LeBron coolly dribbling out the clock, the booing began.

Another bucket would push the team across the 100-point threshold, earning a free Taco Bell beef chalupa for every fan in attendance. So naturally people were upset. Later, LeBron would say of the incident, "I can't believe people who buy season tickets get worked up over a goddamn $1 fucking taco."

First of all, it's a chalupa, not a taco. And, LeBron, they do. That little, tasty fried shell stuffed with meat, cheese, sour cream, lettuce and tomatoes tener algo bien agarrado on the minds and stomachs of Cavs fans. With Clevelanders' penchant for food of any kind, especially anything of the fried variety, coupled with the sorry state of the economy, that little chalupa is vitally important.

THE HISTORY AND STATS

The 100-point chalupa promotion was instituted for the 1999-2000 season. Cavs' Senior Vice President of Communications Tad Carper says it was a natural fit for the team and the purveyor of the Fourth Meal. Taco Bell had already done the promotion in other cities (and still does in Los Angeles and Portland), so the Cavs lined up 90 local establishments to sling the Ameri-Mexican goodness.

As the Cavaliers near the century mark, the chant begins to echo from Loudville down to the floor. CHA-LU-PA! CHA-LU-PA! Although a Chalupa countdown sometimes appears on the JumboTron, the chant was an organic outpouring of fan fervor. "It's a fun word to chant," says Carper. It also doesn't hurt that it's three syllables, which makes any word or phrase chantable - take "M-V-P!" for instance, or "Pitts-burgh Sucks!"

The gist, however, is that everyone likes free shit. And while it's slightly embarrassing to see a grown man vocalize his love for a free gastral deathtrap that normally costs less than two bucks, it's certainly not unique. These are the same guys who would hurtle themselves past two small children and a seeing-eye dog for a cold hot dog shot out of a cannon.

The phenomenon's low point (or high, depending on your perspective) involved the Cavs, but it was closer to the border, in Dallas. On February 15, 2001, the Mavericks were handily beating the Cavs 98-81 as the clock ticked down. Dallas had a similar deal with Taco Bell, and the crowd was chanting. With seconds left, Gary Trent scored to deliver the chalupa goods. The Cavs' Wesley Person was none too pleased and decked the Mavs' Gary Trent, leading to a brief skirmish, during which Mavericks owner Mark Cuban rushed onto the floor (for which he was later fined). The story got national attention.

"Chalupa" has entered the vernacular of players and coaches. Here are some of the best quotes.

After the famous Chalupagate game, Steve Nash said, "There's not too many legends in this locker room, but Gary Trent is now a chalupa legend." Following the same game, Wesley Person said, "This is bigger than any chalupa."

Former Cavs coach John Lucas: "We can't even provide chalupas for the fans."

Always-entertaining Ricky Davis, on being booed after missing two free throws with the Cavs stuck on 99 points at home: "If [the fans] had helped us when we were down by eight points, then maybe they would have gotten a chalupa. What do you think of that?"

There's a story that during Shawn Kemp's stint in Cleveland, he was asked after a game about the Cleveland crowd chanting CHA-LU-PA, and he supposedly responded, "Man, they have called me so many names this season, I don't even listen no more."

For fans weary of the onslaught of marketing at sporting events, actually tying a promotion to the outcome of a game seems like a natural target for ridicule, and possibly something more dangerous. I asked Dr. Simon Chadwick, Professor of Sports Business Strategy and Marketing at the Coventry University Business School in England, about the somewhat devious connection.

"I think what you have seen is, in some ways, the ultimate nexus of sports and commerce," he wrote in an e-mail. "Many might call it a tipping point, the point at which sport has ultimately become subservient to business - the players, teams and fans more interested in securing a 'freebie' than producing a contest of genuine sporting quality."

But as long as it works, it will continue. Even that Dallas incident, as well LeBron's comments about chalupas - which were picked up by just about every sports blog - amount to invaluable free advertising for Taco Bell. According to CNBC's Darren Rovell, the Maverick incident was equivalent to $1 million in free publicity for the fast-food giant. LeBron's comments can't be far behind in value. And who knows how much 20,000 fans chanting CHA-LU-PA at home games for nine years is worth.

A rep from Taco Bell says, "The 100 Point Chalupa Program is not only a great way to drive traffic to our restaurants, but it also generates buzz both in the stands with fans and in the media such as national television broadcasts."

That seems like a giant understatement when you consider that two separate times in the past six years, the chalupa has been the focus of the story - not the game. Tipping point? Maybe. Muy bueno marketing? Indeed.