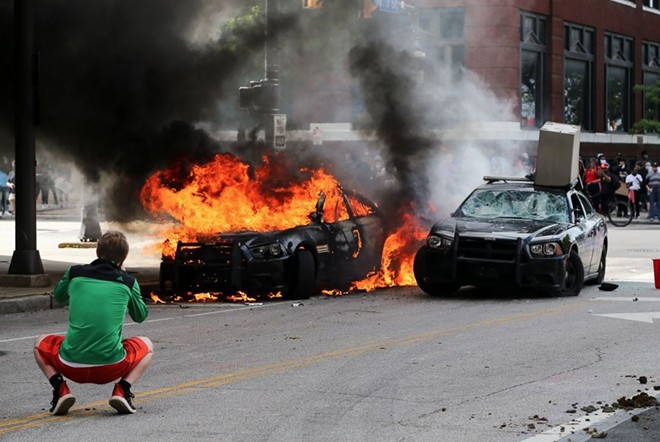 Emanuel Wallace / Scene
The U.S. Attorney's Office in Cleveland earlier this week dropped charges against two Pennsylvania men who had been among the most high-profile arrests after the May 30th racial justice demonstrations downtown.

Brandon Althof Long and Devin Poland were arrested in Erie, Penn. a week after the May 30th riots for bringing a firearm and flammable materials to Cleveland, and for coordinating their plans over the phone.

In an affidavit filed at the time of their arrest, texts between Althof Long and Poland revealed that they intended to travel to Cleveland to "protest watch." They called it an opportunity of a lifetime and discussed bringing ingredients to make Molotov Cocktails.

The arrests were touted by Police Chief Calvin Williams, at the time, as corroborating evidence that the evening's looting had been instigated by outside agitators. Williams claimed in an earlier press conference that the agitators hailed from "outside the state."

Evidence against the two men was thrown out in November, however, when a judge ruled that violating the curfew imposed by Mayor Frank Jackson was not sufficient cause to search their vehicle. The defendants had not acted recklessly in defiance of a police order, the U.S. district court judge deemed. Therefore the pistol and the two bottles of Sterno Firestarter Instant Flame gel found in their car could not be used against them in court.

The items found in the vehicle were never used on May 30. According to Althof Long's lawyer, the two men committed no illegal acts that night. They arrived in Cleveland at about 10:45 p.m., after virtually all of the looting had occurred.

The one-sentence dismissal motion, filed Tuesday in Cleveland and first reported by cleveland.com, did not elaborate on why the indictment was dropped.