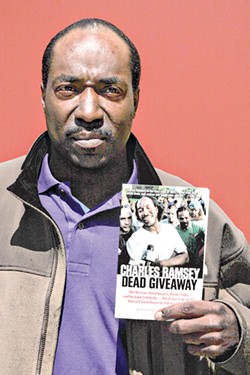 The one-hour program will stream on the Rogue Radio Network — "No Rules. No Restrictions." — and will give Ramsey a wide berth to talk about whatever he pleases in the manner he deems fit. Early word from Chuck is that he won't limit himself to local subject matter.

Charles Ramsey, for whatever it's worth, is a raging (and by all accounts sincere) Tea Party Republican.

You'd already know that if you read his 168-page "manifesto" Dead Giveaway: The Rescue, Hamburgers, White Folks, and Instant Celebrity . . . What You Saw on TV Doesn't Begin to Tell the Story..., which he published with Cleveland's Gray & Co. Publishers on May 6, 2014, a year to the day after the Seymour Avenue rescue.

That book, which we're sorry to report was a real letdown in terms of literary merit and basic coherence, was ghostwritten by local freelancer Randy Nyerges, which we mention only because Nyerges has become something of a promoter and improbable sidekick for Ramsey. He'll be co-hosting the webcast and is already overselling its impact:

"[Ramsey's] one of the most bankable names in Cleveland," Nyerges said at a press conference in the Rogue studios in Strongsville last week. "You've got LeBron James, Johnnny Manziel and Charles Ramsey. Who's left?"

Yeesh. And Nyerges didn't stop there:

"There is active and ongoing talk about 'Dead Giveaway, the Movie,'" he said. "It's at the point where their lawyers are talking with our lawyers."

Meantime, a radio show is probably the optimal outlet for Ramsey, a guy who made his name — however momentarily — by speaking from the heart and on the level about stuff from which most of us shy away. Love him or hate him, he'll rile folks up on his webcast and will defend some truly wacky theories.

Tom Feran at the PD reported that the Rogue Radio Network was started in 2009 by producer and announcer Marty Allen, who evidently was canned by WTAM after 15 years of service.