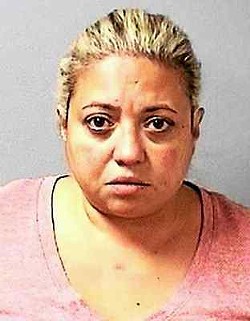 Courtesy Mentor PD
Gina Miller
Update: Gina Miller, the one-time psychic in Mentor who was arrested and charged with scamming nearly $1.5 million from 11 victims, has pleaded guilty to one count of aggravated theft. She had originally faced 28 counts that spanned crimes covering 20 years as she threatened clients into forking over dough that fed her lifestyle of Rolexes and Louis Vuitton purses.

Miller preyed upon victims by telling them bad, bad things would happen to them or their families if they didn't pay her. Nearly a dozen, including one elderly woman who handed over more than $100,000 to Miller, believed her.

Sentencing is set for late April.

(Original story 9/7/16): There's the run-of-the-mill psychic gambit — palm readings and tarot cards that'll run you $15 or $20. You pay for the novelty and, depending on your beliefs, some purported insight and whatnot.

Then there's the psychic who goes nuclear, threatening victims that the magic maker will withhold protection against future bad events unless they pony up. There's dozens of these stories across America — one New York psychic got a lovelorn guy to fork over $713,000 in a scam. Gina Miller, a woman who ran Psychic Reader in Mentor, is now included in that collection, though the sheer amount of money she collected from victims puts her in elite company.

Miller, 46, allegedly scammed as much as $1.5 million from 11 victims, including $106,681 from an elderly woman. Police say she's been at this for about 20 years now. When they searched her house, they found more than $20,000 in cash, Louis Vuitton purses, computers, Rolexes, and jewelry.

She's now been indicted on 28 counts including, according to Fox 8: "one count of engaging in a pattern of corrupt activity, five counts of aggravated theft, six counts of grand theft, two counts of theft, one count of identity theft, 10 counts of telecommunications fraud and three counts of securing writings by deception."