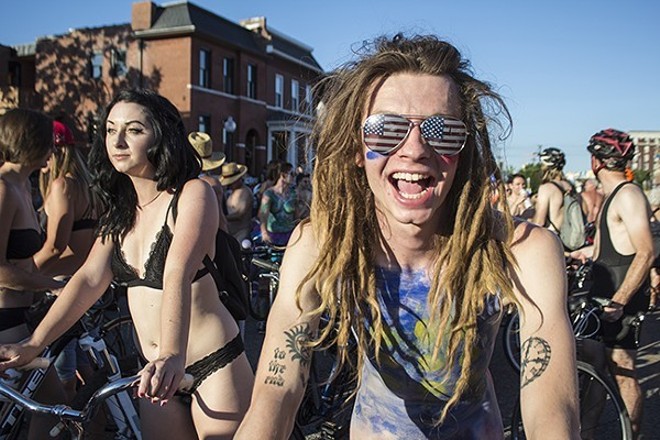 Forget Baker Mayfield and the Browns. Brush aside celebrations touting our restaurant scene. Ignore any and all accolades bestowed upon our artistic and cultural institutions. Turn away from the grandeur of Lake Erie and close all those property-tax-exempt tabs extolling the success and virtues of the Cleveland Clinic.

Until Cleveland participates in World Naked Bike Ride Day, we are nothing but a C-list city. Maybe. On a curve.

That 15 years after its creation Cleveland has somehow still refused to get in on the action is at once bewildering and predictable. Trends arrive reliably late around these parts, as if instead of a normal cell membrane around the city there's a quadruple layer, possibly made out of pierogies, through which the osmosis of culture takes years to penetrate, and after having arrived, being much too tired and worn down given the great effort to get through, present themselves not so much as pure distillations of the original form but tired, generic knockoffs.

Cleveland also doesn't track as a particularly protest-inclined city, which is exactly what the event began as and remains, in some form. Whether you come fully clothed, half clothed, or nearly totally naked, the event is one celebrating body positivity, bike safety, consent and environmental protection.

The PG-13/R/X event has spread to dozens of cities and multiple countries.
Sure, you expect New York and Portland and Boston and Chicago and other cities heavy on population and loose on morals to be among the ranks, early and often. But cities like St. Louis, Columbus and Buffalo are not only on board with the fleshy pedal-fests, but are now entering their second decades of doing so in some cases, and with organized and sanctioned support of their local governments.

As Cleveland proudly (and ignorantly) gauges itself superior to the rest of America, as some of you stand stanning for the CLE in your $30 t-shirts bearing the name of the city, let it be stated and noted for the record that that belief is not only generally wrong, but specifically wrong based on a very simple measuring stick — that we have yet to take off that split-texted top and let the measuring stick fly free while cycling down the street with hundreds of our friends and neighbors. As cities around the country announce the dates of their respective rides this month, let us all reflect on our longstanding communal failure.

We say this not solely because nearly half, we estimate, of all Greater Clevelanders with access to a computer or phone would click on the inevitable slideshow we'd publish of the event, thus raining pageviews and digital ad dollars from heaven on this free rag, but because it is simply the truth.

There is, of course, time to rectify the mistake. And, should we not, come 2025 or some distant year, Cleveland's natural biology will take over and we'll be left with the Hingetown Tank Top One-Block Bike Parade or something. We implore the Cleveland bike community to take the appropriate action sooner than that.