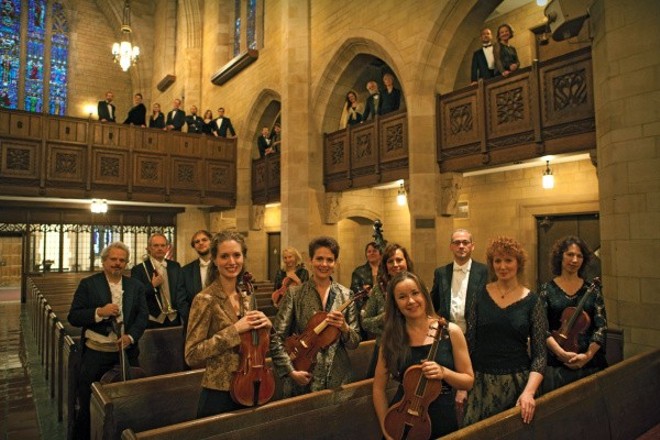 Channelling Yo-Yo Ma? Cleveland Orchestra principal cello Mark Kosower will play “Bach for Humanity,” two concerts of unaccompanied cello music by Johann Sebastian Bach this week, including his own transcriptions of a Bach violin sonata and a partita. The first one (free admission, but seating passes required) is in Mixon Hall at the Cleveland Institute of Music on Wednesday, March 6 at 8:00 pm, the second under the auspices of the Cleveland Cello Society on Monday, March 11 at 7:30 pm in Reinberger Auditorium on Cleveland’s West Side (tickets here).

Apollo’s Fire will follow up last season’s “Three Duels and a Wedding” with “Three Duels and a Funeral,” the duels being concertos by Bach and Vivaldi, the funeral Telemann’s graveside tribute to a pet canary who ran afoul of a cat. Soloists include Johanna Novom, Adriane Post, and Susanna Perry Gilmore, violins, René Schiffer and Rebecca Landell Reed, cello, Kathie Stewart, traverso, and for the Canary Cantata, Jeffrey Strauss, baritone. Click here for times and venues of the four concerts from March 7-10, and to order tickets.

To celebrate the 80th birthday of American composer Joan Tower, Liza Grossman will lead her Contemporary Youth Orchestra in Tower’s Fanfare for the Uncommon Woman #6, Stroke, In Memory (for string orchestra), and Tambor at Cuyahoga Community College’s Metro Auditorium on Saturday, March 9 at 7:00 pm. Tickets can be reserved online.

Cleveland Chamber Choir’s “March Choral Madness” concerts this weekend won’t feature dueling madrigals vying for slots on basketball-like brackets as they did in 2018. Instead, artistic director Scott MacPherson has chosen an interesting program of works by Johannes Brahms, Andrew Rindfleisch, and Benjamin Britten for the Choir’s mid-season programs on Saturday, March 9 at 7:30 pm at Brecksville Methodist Church and Sunday, March 10 at 3:00 pm at First Baptist in Shaker Heights. Buy your tickets online.