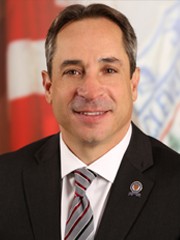 ClevelandCityCouncil.org
In the Zone.
Speaking of which!

At its meeting Monday night, Cleveland City Council passed a resolution opposing the Dakota Access Pipeline and standing in solidarity with the "indigenous resistance" at the construction site.

Councilman Matt Zone, who sponsored the resolution, told Scene that he opposed the pipeline on both environmental and human-rights grounds.

"I think I've earned my mark here in City Council as one of the environmentalists on council who typically speaks out on issues that could potentially have a detrimental impact on our land," he said.

Zone was a vocal opponent of the Keystone XL Pipeline, the controversial pipeline which sought to bring crude oil from the tar sands of Alberta, Canada to Nebraska. Zone said the parallels with Dakota Access are striking. In its current design, for instance, Dakota Access would be only ten miles shorter than Keystone XL. It would pump 450,000 or more barrels of crude oil per day, extracted from the Bakken Oil Fields of North Dakota, and ship it all to Illinois.

The proposed route passes through ancestral lands of the Standing Rock Sioux Tribe and under the Missouri River, the source of the tribe's drinking water. (These hazards were addressed in a letter from 31 environmental groups to President Barack Obama, last month.)

Cleveland City Council joined other cities across the country in opposing the pipeline. And Zone said it's especially important for cities in the Great Lakes region to stand up for the importance of water, especially in areas where it's scarce.

“We are bound to protect water,” the Cleveland City Council resolution reads. “Just as the shores of Lake Erie are center to life here in Cleveland, so too the Standing Rock Sioux recognize and understand that without water, there is no life.”

Councilman Zone, it turns out, had a personal attachment to the resolution as well. He told Scene that when he was a boy in the sixties, a large Native American family, the Raves, moved in two doors down. They'd been relocated as part of the Federal Government's Indian Relocation Act, a campaign to assimilate reservation Indians into mainstream American life.  (Read all about that program in Cleveland here.)

"I became fast friends with a couple of the children, and remain lifelong friends to this day," he said. "In my formative years, I spent every day hanging out with Native American Indians and came to learn and respect their culture."

The Dakota Access Pipeline, of course, isn't the only pipeline under construction and under scrutiny in the United States. Indeed, both the Rover Pipeline and the NEXUS Pipeline are being built (though not without ongoing opposition from local opponents) just south of Cleveland.

"I think it should concern all of us," Zone said, when asked about his position on those two pipelines. "Disclosure of what's being used and how it's being used needs to happen."