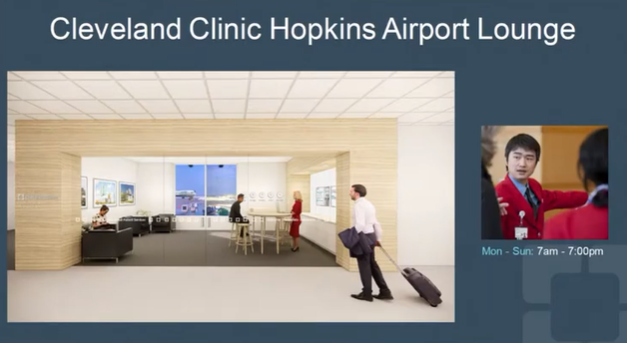 The 480 square-foot lounge, which would be located in Concourse B, would generate rental revenue for the airport while allowing the Clinic to greet domestic and international patients as they arrive and assist them with any travel or Clinic-related questions they might have.

Among U.S. hospitals, the Clinic owns the highest market share of international patients, with more than 10,000 visitors and companions arriving from 120 countries each year. More than 53,000 domestic patients and companions travel to Cleveland for services at the Clinic each year as well.

Dr. Maan Fares, who heads the Clinic's Global Patient Services Team, told the council committee that the Mayo Clinic in Rochester, Minn., is the only other hospital in the United States with a dedicated airport lounge. He said that the Clinic has no intention of providing clinical services at Hopkins, but that a lounge would nevertheless enhance the experience of traveling patients and help showcase Cleveland as a hub for healthcare and elevate the Clinic's brand.

Councilman Kerry McCormack, who chairs the transportation committee, asked facetiously if an airport lounge would be enough to get the Clinic into the top position on the annual U.S. News and World Report Rankings. (Dr. Fares is also a cardiologist and replied that the Clinic has been number one in heart care for years.)

The Clinic's rent to the airport would be roughly $104,000 annually (at a rate per square foot set by the Hopkins master lease agreement.) The Clinic would bear all costs for construction, maintenance and staffing of the lounge. Clinic representatives assured council that they would follow best practices for contracting with minority-owned and female-owned businesses as they built out the space.

The lounge itself, pictured in the artist's rendering above, would be relatively small and modestly decorated, perhaps with photos of the Clinic's facilities in Cleveland and clocks representing time zones where the Clinic operates worldwide. Dr. Fares said it is not an area where people are expected to congregate and spend time, and that the architect would be tasked with creating an open and welcoming space that also maintains a sense of privacy. For now, the Clinic's plan is to operate the lounge from 7 a.m. to 7 p.m. seven days a week, though Dr. Fares hinted that that was subject to change.

Responding to questions from city council members, Dr. Fares said that while the concierge desk would be open to all, its main function would be assisting the Clinic's patients.

"We're not there to capture patients or to outdo other hospitals," he said. "The primary purpose is of course to serve our patients, but if people need help, we would help."

The legislation authorizing the lease agreement was unanimously voted out of committee and will next be heard by council's Finance committee before passage.