Cleveland Gets Serious About Pothole Problems 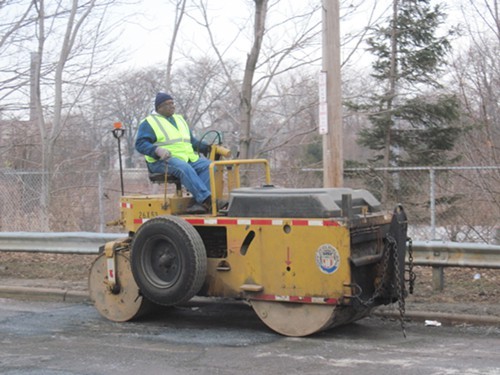 It’s mid-March, and - oh, look - the city of Cleveland is doubling down on pothole patching, kicking off its renewed efforts with a newly hired private pothole crew near the intersection of Clark and Lorain. It’s Tuesday, March 11. TV news crews are out in full regalia.

The city has contracted Pennsylvania-based Pothole Patchers Inc. (potholekillers.com, really) to deal with the nightmarish conditions. Director of Public Works Michael Cox is onsite, taking questions at the corner of West 88th and Clark.

The Pothole Patchers Inc. contract runs $255 per hour for an allotted 1,100 hours. “It’s a lot of money, but it’s worth it. It’s worth it to catch up to where we’re at with the potholes,” Cox says. The private crews have been given a list of prioritized streets from the city. Elsewhere, eight Cleveland crews work their own brand of less-than-stellar pothole magic. (The city’s crews rely on a manual patching process that isn’t as permanent as residents might like; Pothole Patchers Inc. steamrolls over those bastards and guarantees a tighter patch.)

“This winter has just been amazing as far as how many potholes and how bad the potholes are,” Cox says, as neighbors within a 1,000-yard radius of the interview look out their windows and mumble, “Well, goddamned duh.”

So what happened? And why has our official Scene van blown five tires this winter alone? (OK, that last part is probably due to late-night drag races with the 19 Action News crew.)

“It’s a natural — asphalt cracks as concrete cracks. What happens with asphalt and concrete is water gets into those cracks and when it freezes, they pop,” Cox says. The temperatures have been so unrelentingly cold (and, as we'll see again this week, erratic) that pothole crews simply haven’t been able to do anything about the problems. Cox estimates the city has had maybe 15 good days to get potholes patched up.

Pothole Patchers Inc. will throw down anywhere from 10 to 12 tons of asphalt in a day. The city’s own manual process nets about eight. Just running the numbers here in a most unofficial capacity, the job should be done sometime in August. ...of 2015.