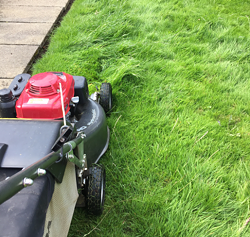 Photo via p_anderton.garden.maintenance/Instagram
It began simply enough when a Cleveland resident told two men he'd give them $20 to cut his grass last Thursday. But the lawn owner only had $10 on him, so he said he'd pay the other half if they returned on Saturday. However, after a dispute over the money, the man ended up with a bullet wound in his hip and a potential leg fracture.

According to a police report, the shooting occurred in the South Broadway area on East 71st Street. The resident later said that the two men (along with a third man who hadn't worked on the lawn) damaged his door when they arrived at about 5:30 p.m. on Saturday.

The man who lived in the home told them he'd put the $10 he owed them toward fixing the door instead. In response, according to the report, one of the men fired a shot that went through the door and into his hip (at the urging of the third man.)

Medics transported the injured man to MetroHealth following the incident.