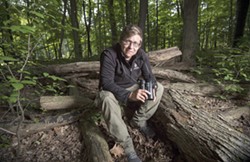 KEN BLAZE
In 2012, Cleveland Metroparks naturalist Jen Brumfield set a record for the most bird species seen in Cuyahoga County in one year. Now, as 2017 draws to a close, she's broken her own record and set another high bar for birdwatchers in Northeast Ohio.

Brumfield has seen 271 bird species as of Dec. 20, when she spotted a Northern Gannet.

Wikimedia
Northern gannet
We interviewed Brumfield earlier this year for our 2017 People Issue.  "I cannot fathom a greater connection to Earth appreciation than birds," Brumfield told us on a windy morning at Wendy Park, one of the finest birdwatching sites in the region. "If you look down through history at their flight — they're powerful, they're free. They're unique. They're beautiful. There's something about birds that reaches through all emotions, all intelligences, all interests."