Cleveland Museum of Art Owns Cambodian Sculptures That May Have been Looted, WaPo Investigation Reveals 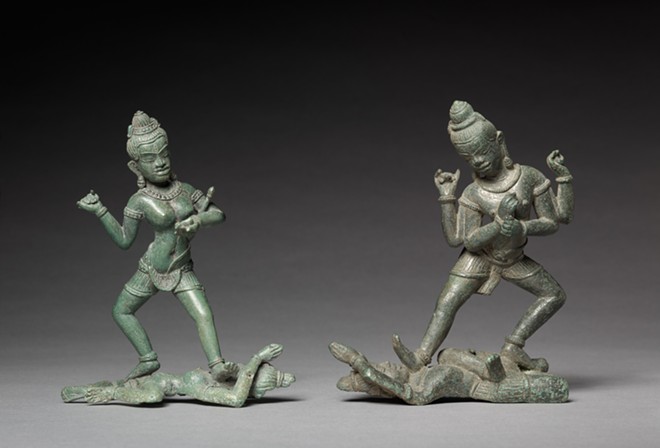 Cleveland Museum of Art Digital Collection
Shamvara and A Dakini, c. 1100. Cambodia, Angkor, 11th century. Bronze; overall: 14.8 cm (5 13/16 in.). The Cleveland Museum of Art, Leonard C. Hanna, Jr. Fund 1985.92
As part of the global investigation emerging from the Pandora Papers, The Washington Post has reported on Englishman Douglas Latchford, a collector of Cambodian antiquities who authorities say profited handsomely off the pillaging of temples and other religious sites throughout Southeast Asia. According to the story, three pieces connected to Latchford are now owned by the Cleveland Museum of Art.

Latchford's alleged illicit trafficking was "part of a decades-long ransacking of Cambodian sites that ranks as one of the most devastating cultural thefts of the 20th century," the Post reported.

Latchford died in 2020 at the age of 88, before he could stand trial, but not before he'd set up multiple offshore trusts to shield his assets, trusts of which ilk are designed to protect the world's elites from taxation and investigation. It was to expose offshore accounts such as these that the Pandora Papers were leaked to the International Consortium of Investigative Journalists (ICIJ).

Washington Post
Responding to questions from Scene, the Cleveland Museum of Art said that none of the three pieces with Latchford ties had been purchased directly from him, though his name does appear in the pieces' ownership history, known as its provenance.

The three pieces are a first century-BC  "male head" sculpture from Southeast Asia, and two bronze sculptures, pictured above, which depict tantric Buddhist deities "trampling the personifications of the afflictions that keep beings cycling around the world of samsara, moving from one unhappy birth, death, and rebirth to another."

All three pieces were purchased by the museum from the London auction house Spink & Son, which was described in prosecuting documents as a Latchford "collaborator." Prosecutors argued that the auction house helped sell Latchford's looted antiquities and was aware of his designs to create false documentation for them. (No one from Spink & Son, which is now owned by Christie's, has been criminally charged, and they maintained in a statement to the Post that they would never sell items "it had reason to believe were stolen.)

The Cleveland Museum had no further information on the pieces in question, but noted that the museum had "a strong, collaborative relationship" with Cambodia and a Memorandum of Understanding with the National Museum of Cambodia in Phnom Penh.

"In 2017-18, the National Museum made the unprecedented loan to the CMA of a spectacular relief from the great royal temple at Banteay Chhmar, which was shown in Cleveland in the context of its own special exhibition," a CMA spokesperson wrote Scene in an email. "Moreover, the CMA and the National Museum of Cambodia have been working very closely in preparation for an exhibition slated to take place in Cleveland in November 2021, Revealing Krishna: Journey to Cambodia’s Sacred Mountain, to which the National Museum will be lending seven masterworks of stone sculpture."

This collaborative relationship notwithstanding, The Washington Post reported that many museums have faced complaints that they ignore evidence of artifact theft and are reluctant to return relics "until confronted with overwhelming evidence that the items were looted."

When asked generally about its process for returning items determined to have been looted, the CMA spokesperson told Scene that cases are reviewed individually, but that the CMA was "committed to maintaining the highest ethical standards in the development and care of its collection."