Police will have seven days to release use of deadly force footage. 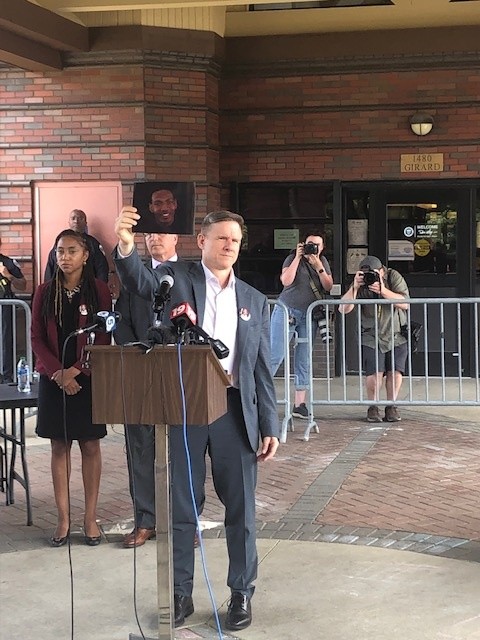 Sam Allard / Scene
Attorney Bobby DiCello holds up a photo of Jayland Walker Sunday.
At the second of its two summer meetings last week, Cleveland City Council approved legislation that will compel the city to release footage of police use of deadly force incidents within seven days.

The ordinance, sponsored by Collinwood Councilman Mike Polensek, is virtually identical to a law in the City of Akron that led to the release of body cam footage in the police shooting of 25-year-old Jayland Walker earlier this summer.

Police body cam footage in that incident showed a vehicle pursuit on Akron's Route 8 and the subsequent shooting, in which eight Akron officers unloaded their magazines into a fleeing and unarmed Walker in an Akron parking lot, striking him 46 times,

The Cleveland legislation was introduced roughly one year ago.

Under the language of the ordinance, the Chief of Police must release footage from at least three city recording devices, like police body cams or dash cams in police vehicles, for any incident in which a police officer uses deadly force or causes serious physical harm to a person. If fewer than three recording devices capture the incident, the city must release all available footage.

The videos must begin 60 seconds before the incident or at the beginning of the recording, and the city must release all available footage, (beyond the footage from the initial three devices), within 30 days, if such additional footage exists. Any person "allegedly aggrieved" by the police's failure to release use of deadly force footage within seven days may petition directly to the city's Director of Law.

The police will not be required to release footage in the seven-day time frame for incidents that occur during "extraordinary circumstances," like natural disasters, terrorist attacks or cyberattacks. This designation also includes riots and strikes, where police have frequently resorted to deadly force in the past. (Cleveland police would not have been subject to the seven-day threshold after the George Floyd demonstrations of June 30, 2020, presumably.)  In these instances, per the legislation, the release of requested footage shall be within an unspecified "reasonable time."

City Council approved the ordinance on the belief that "the prompt release of footage from a City recording device of police use of deadly force will further the goals of transparency and earned trust," which the legislation notes is necessary for effective law enforcement.