Cleveland Police Officer Killed in Hit-Skip on I-90, Suspect Taken Into Custody

WOIO
Update: Police have taken a man into custody in connection with the hit-skip that killed Cleveland police officer David Fahey this morning on I-90 near Warren Rd. Law enforcement agencies had surrounded a home in Lorain where a car matching the description had been found.

Cleveland police this morning will brief the press in the atrium at MetroHealth after Cleveland police officer David Fahey, 39, was struck and killed in a hit-skip accident on I-90 near Warren Road.
click to enlarge 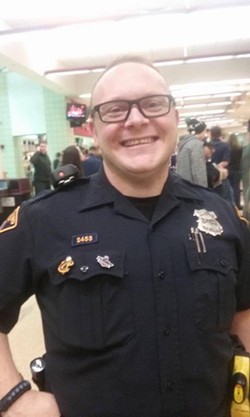 Below, the scant details so far from police, including a loose description of a vehicle that may have been involved — a possible white Toyota Camry with a partial license plate of GTD and damage to the front end of the car.

Photos of the vehicle involved in this morning's hit-skip accident. PLEASE SHARE. pic.twitter.com/Ledm1Rf5sO

The accident occurred around 6 a.m. this morning, according to Cleveland.com, and the officer involved was diverting traffic after a previous accident that involved a van hitting a firetruck, the firetruck itself was blocking traffic from an even earlier accident. One other person died as a result of one of those accidents this morning, but it's unclear from news reports which one.


Video of @LakewoodFire turning into oncoming I-90 traffic from the Rocky River crash to get to the fallen @CLEpolice officer. pic.twitter.com/KAX3Zd3RBz


I-90 westbound remains closed between I-71 and Warren at this time.