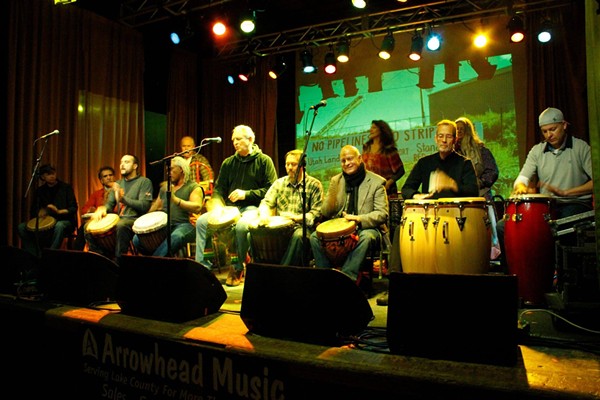 Like many folks who grew up in Northeast Ohio, Bob Hughes enjoyed Lake Erie. That enjoyment, born of childhood trips to Mentor Headlands, is part of what made Hughes passionate about water as he got older, something he kept tucked away as he participated in various charitable endeavors over the years.

The two intersected recently after he saw a friend's Facebook post stating that he wished there were more he could do about what was happening at Standing Rock in North Dakota than talking about it on social media. It stuck with Hughes, who figured action could start by forming an organization — Cleveland Rocks With Standing Rock — that would lean on local artists and musicians who wanted to help the protestors on the other side of the country but couldn't get there.

That led to a December event with local musicians performing at the Beachland Ballroom that raised a little over a thousand dollars.

“The unjust way these people have been treated is horrible," Hughes said in a phone interview. "They’re trying to protect their land, their sacred land, from being polluted. To say that they have no rights to their own land and we're going to build the pipeline by any means necessary is awful. This country has treated Native Americans wrong for forever and never said we're sorry, and we see the way they have and been treated and it’s just terrible. I challenge anyone to watch what's happening and not do anything. Where these pipelines are going and what they could pollute, they could eventually affect all of us.”

There are a lot of people to thank for the grassroots effort so far, but Cleveland Rocks With Standing Rock is especially grateful to the local Lenape Sioux Nation for their assistance in the events. Hughes said that without them, they’d be “just a bunch of dumb white people.”

And although Hughes is acting as de facto spokesperson for the group, he made it clear that this is far from a one-man effort. He’s grateful for the help of Cindy Barber at Beachland Ballroom, Leatrice Bard Tolls, Ralph Solinintz, Loren Naji are other group members who have kept momentum going.

“Transparency is important to us," he said. "We don’t want to be pinned as left or right, we have members of both parties. This is human rights and land rights and not about which side of the aisle you lean towards.”

A second event raised even more than the first one, with the funds going towards legal defense for the people who have been incarcerated for “trying to protect their land,” as Hughes puts it. Any leftover funds the group have may go toward fighting the Nexus Pipeline.

That's because he sees connections between what's happening with the DAPL, Lake Erie and the Nexus Pipeline, plans for which have it being built through parts of Northeast Ohio later this year.

As of now, the group has a third event scheduled for February 20th from 7 PM-11 PM at Bop Stop, the live music venue on Detroit Avenue. They’re planning on showing a documentary by John Bolenbaugh, a whistleblower who formerly worked for oil companies, and Bolenbaugh will be streamed via Skype for a question and answer session afterward. They’ll also have a couple of musical acts, of course.

Hughes says the events so far have focused more on awareness as opposed to protest, focusing on what pipelines do to the water and air, but they could do more protests as time goes on.

A fourth event is being planned in Wadsworth, a suburb through which Nexus will pass.

In the meantime, Hughes says that if you can’t make it out to an event, there are other ways to help. “If you’re with Bank of America or Wells Fargo, switch your bank. They support the pipeline in North Dakota. Let the banks know, ‘As a customer, I don’t agree with you supporting this.’ Don’t get gas at Sunoco. They sponsor all of the Energy Transfers.”

While the fight may be an uphill climb, “You have to keep optimism," Hughes said. "I'm a realist. It's a big foe we’re up against. One snowflake can't do much damage, but if you pile enough up, you have a blizzard. We're not the first community to take action but we all build on what others have done. Water is life. Without clean water we can't sustain ourselves."”

You can visit the group’s Facebook page at Cleveland Rocks With Standing Rock.