CLEVELAND SURF: ONLY THE STRONG SURVIVE

Contrary to the title of an infamous song, there is surf in Cleveland. 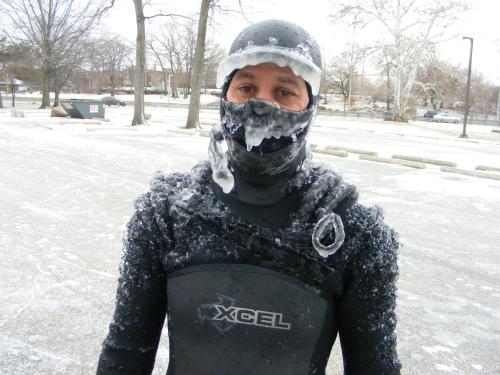 The waves, weather and conditions are slightly better than nothing, but in its own way, Cleveland’s surf scene is world-class; and the people have a good attitude. The new documentary Out of Place examines the small but dedicated cult that rides Lake Erie’s slow-motion waves when the weather breaks the right way, hoping — usually in vain — for four-foot barrels.

“We’re not known for great waves or postcard imagery or anything that’s made surfing a billion-dollar industry,” says the film’s director Scott Ditzenberger. “Every now and then, there’s that magical day where everything works, and it’s you and your friends on the lake, and you’re practically alone — no boats in the water — and it’s a beautiful thing.”

Ditzenberger was born in San Diego and grew up on the Jersey shore. Surf culture always intrigued him, but he didn’t learn to ride until he moved to Northeast Ohio. When first heard about lake surfers, he assumed they were an urban legend like the Lake Erie Monster. But he began investigating and found a small community centered in Geneva on the Lake.

Out of Place profiles pillars of the Cleveland surf scene like Neal Luoma. Luoma grew up alternating leisure time between his family’s Ashtabula campground and Florida, where he learned to surf. He’s been sharing the waves with all comers since the 1950s.

Some of Cleveland’s small-wave riders are locals who have only surfed Lake Erie. Others are what Ditzenberger calls “displaced surfers” like Johnny Santosuosso, a partner in downtown restaurant Johnny’s. Like other characters, he surfed Florida and Hawaii, then moved to Cleveland for work.

Unlike most surf communities, the Cleveland crew isn’t a territorial tribe of alpha males. Compared to California and Hawaii’s overpopulated breaks, Mentor’s empty beaches have enough space for everyone who can take the cold — and there aren’t many. The documentary never shows more than four surfers in the water, wrapped in black full-body wetsuits, braving 35-knot winds to ride two-foot brown swells on gray mornings. One surfer observes, “Everything looks like a black-and-white movie.” Another says, “It’s raw nature, total beauty.”