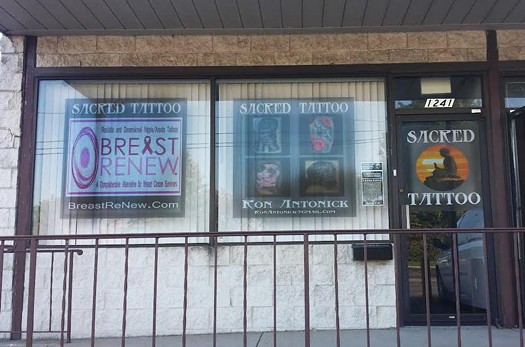 Photo provided by Ron Antonick
Casual passersby might not notice the tattoo parlor sitting along a dusty stretch of East 305th Street in Wickliffe, marked by a few window posters and a sign that reads “Appointments Only.” But Sacred Tattoo is becoming a destination for a very specific group of clients: breast cancer survivors.

Enter Breast Renew – a service designed by Sacred Tattoo’s Ron Antonick which seeks to rebuild the body image and confidence of breast cancer patients through nipple and areola re-pigmentation. “After a mastectomy, after breast reconstruction surgery, there’s still something missing for some women,” the artist says.

That’s where Antonick comes in. With over 27 years of tattooing experience, Antonick specializes in 3D nipple recreation to help women reclaim their bodies after months or years of being poked, prodded and often completely stripped of their natural breasts and nipples. Using exclusively organic and vegan-friendly materials, Antonick says his entire bilateral procedure sets a patient back about two hours of time and $600. But the emotional and physical impact – and his clients attest – can’t be gauged by traditional metrics. 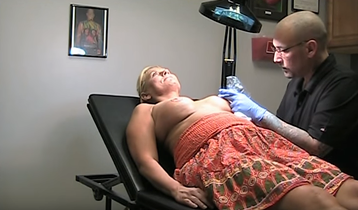 Photo provided by Ron Antonick
“When you have breast cancer, you feel like you lose everything that makes you a woman,” 46-year-old survivor Jeannine Barnes says. “You lose your hair. You lose your nails. You lose your breasts. And after it’s all done, you’re still missing something. For me, [the nipples were] the something that I was missing.” After going to see Antonick for the procedure last January, Barnes – who was diagnosed in 2005 and has since undergone five surgeries and countless rounds of chemotherapy – says she finally feels like she can start moving forward. “There are good days and there are bad days,” she says, “but because of [the tattoos], I don’t even see my scars anymore.”

For 52-year-old Gwen Baus, mirrors were a source of anxiety before she went to see Antonick. “I don’t know if any woman would feel differently than me, but [without nipples] you don’t look normal,” the invasive lobular carcinoma survivor says. “You don’t look like yourself and you don’t want to look in the mirror when you take your shirt off at night.” After receiving nipple re-pigmentation, Baus says the effect was instantaneous. “What a difference! Afterwards, we went to church and my husband had to tell me ‘no showing everybody!’” she says with a laugh. “They look so realistic though, it’s honestly amazing.”

Word of mouth from clients like Barnes and Baus has been Antonick’s biggest asset to get his business off the ground, but he says it’s not always easy to reach folks outside of the tattoo community. He’s had to make some aesthetic changes to his studio to bridge the gap between inked veterans and survivors coming in for their first tattoos. “I’ve changed all of the art in here,” he says. “You don’t want to intimidate someone with skulls when they walk in, especially after what they’ve been though.” 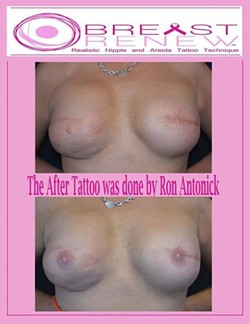 Photo provided by Ron Antonick
With well-decorated arms and a neck tattoo of his own, Antonick says he’s had to battle the stigma often associated with tattoo artists on a personal level as well. “I’ve been asked ‘how long were you in prison?’” he laughs. “Sometimes we’re looked down upon because we’re not medical professionals,” he adds. But for Baus, and many other potential customers, that’s exactly the kind of person they want heading up their re-pigmentation procedures. “A surgeon does surgeon things,” Baus says. “A tattoo artist is a tattoo artist. My surgeon offered to do mine and I told him ‘No, I’ve got someone else.’”

Plenty of women have reached out to Antonick since he launched this new branch of his business in 2014, including 74-year-old Jan Matejka who was diagnosed with terminal metastatic breast cancer. “I have 12 grandchildren, one great grandchild, and four kids. I’m leading a normal life. But who knows where I’ll be in a year from now,” she says. “I will never be cancer free. And I can’t participate [in Antonick’s procedure].” As a result, Matejka and her daughter are donating resources to allow another woman to have the tattoos done in her place.

“The before and after photos of the women that have come to Ron and Breast Renew speak volumes to the care and passion Ron puts into his work and into making these women feel comfortable looking at themselves in a mirror again,” Matejka’s daughter says via e-mail. “Ron and Breast Renew are making a difference to breast cancer survivors and we hope that we can make a difference too.”

As part of Breast Cancer Awareness Month, Antonick, too, has offered a few complementary procedures to select clients who are unable to pay. It’s not about the money, he says. “To do something like this, and hear afterwards that you made some sort of difference… that’s what matters.”