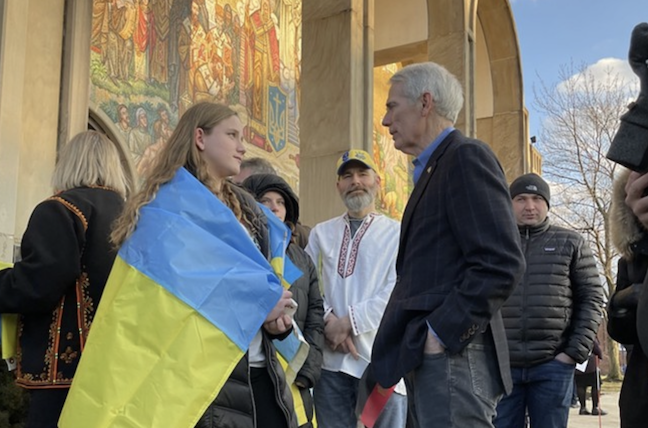 Photo by Nathan Rizzuti
Senator Portman at the rally Sunday

The pews in the nave (body of the church) that seat up to 450 weren't enough to hold the oncoming swell of support. Still, many found space in the aisles, in the front narthex and vestibule, the balcony next to the choir stands, and spilled out on the Cathedral's porch and front lawn. And these weren't the only intended witnesses; the event was recorded and sent to be viewed by family members, friends, fellow believers, and fighters in Ukraine.

The gospel recitation came from the fifteenth chapter of St. John's Gospel, "No one has a greater love than this, that someone would lay down his life for his friends."

"We are praying today," Father Michael sang, "for all Ukrainian people, the President of Ukraine, Volodymyr, the government and armed forces and for all members of this holy temple and for all the people that are present here today—that they may be delivered from affliction, wrath, danger, spiritual and physical need, and that they may be in good health and well all the days of their life. Oh, merciful Lord, hear us and have mercy."

The choir's chants punctuated each stage of the prayer for Ukrainian resistance and survival, as a soft blue light poured in through the side windows and down onto the prayerful congregation.

Asking all present to kneel, Rev. Michael continued his prayer.

"Our brothers and sisters—Oh, Lord—are once again threatened by aggressors who see them only as simple obstacles blocking their path to the complete domination of the precious land and the resources of the country of Ukraine."

The speech's tenor was bold and unwavering, but at its heart was an expression of deep anguish and revealed a sense of looming devastation.

"Our hearts and thoughts are overwhelmed by the destruction we hear about and see taking place all over Ukraine, and the suffering of her people. This Russian federation war was brought about by only one man who is determined to invade and destroy our nation of Ukraine…It' not just our native, beautiful Ukrainian land that he wants. He also wants to destroy our Ukrainian Churches—real Ukrainian churches—our faith, our beautiful Ukrainian language, traditions, and culture."

In his closing remarks, Father Honturak underscored the importance of their continued faith expressed through prayer. 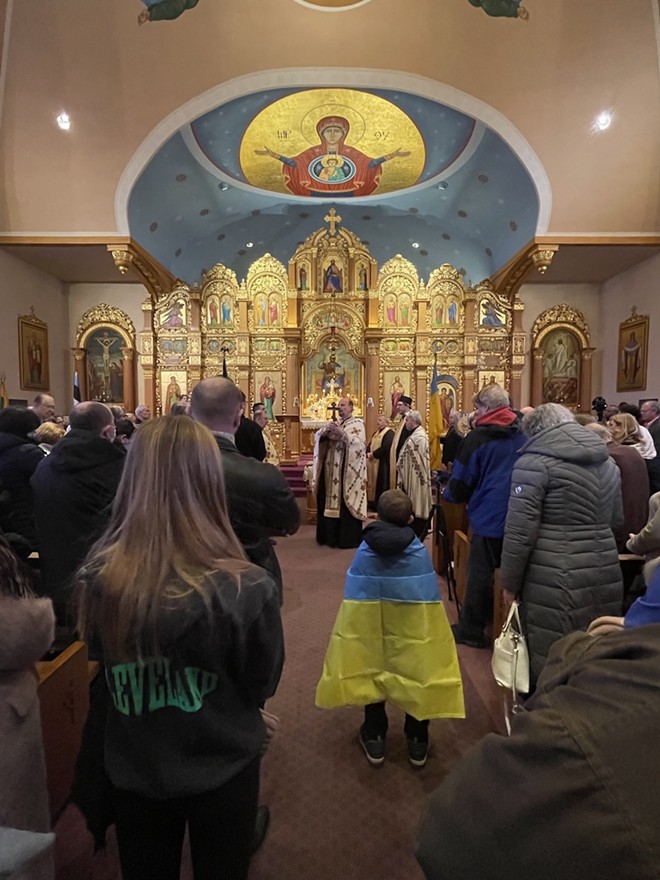 "We gather here today…to use a powerful weapon against the Russian aggressors—our prayers…We must continue to use this weapon of prayer to beseech the Lord God to protect Ukraine and her people from the attack…So, today, as Ukrainians, and all that are here to pray and support our homeland, let us say, may God bless Ukraine, and all the people of the nation of Ukraine…Slava Ukraini."

Once the prayer concluded, Marta Keheller, President of the United Ukrainian Organization of Ohio, took the stage. She introduced Lee C. Shapiro, regional director of the American Jewish Committee in Cleveland.

"We are here today to express unwavering support for the sovereignty, independence, and territorial integrity of Ukraine," Shapiro began.

She chastised Putin's forceful spread of disinformation to achieve backing for his actions, bringing the congregation to applause.

"As Jews, we know only too well what happens when democracy is threatened, and rule of law eliminated. President Putin has spoken falsely about genocide and the need to de-nazify Ukraine. It is not Ukraine, led by a democratically elected Jewish president who lost family in the holocaust—no it is not Ukraine—but it is Russia, led by a tyrant who has been using Hitler's 1938-39' playbook to advance his ambitions, that needs to be de-nazified."

Parma Mayor Tim DeGeeter spoke after Lee and expressed the meaning he found in his leadership of a town with the state's most concentrated Ukrainian population. In Ohio, there are over 40,000 Ukrainian citizens; and Parma is home to the most prominent Ukrainian community.

"Ukraine is Parma… We are so proud of the Ukrainian churches that dot our cities landscape, our Ukrainian business here in the Ukrainian village and the Ukrainian people that make up not just here in Parma, but Northeast Ohio…We pray for you because we are you."

Representing the federal government was Marcy Kaptur, co-chair of the Congressional Ukraine Caucus and currently the longest-serving woman in the history of the United States House of Representatives. She opened her remarks by casting assumptions about how the Ukrainian conflict will shape this century's geopolitical horizon.

"I feel that this moment is the turning point of the 21st century. And I believe that God will be with us and that we will see the conversion of Russia…I believe that Ukraine is going to be a portal of liberty."

She added comments about the current state of Congressional attitude towards action in Ukraine and her desire to continue fighting for support.

"I think we can put together a majority to maintain our support of the Ukraine. I can guarantee you, no nation on earth has done more for Ukraine than the people of the United States of America."

These comments created a frustration from a few congregants as a man seated close to the front cut her off. "This should not be on Ukraine at all. Put boots on the ground…America needs to act."

His comments prompted many to applaud, and a voice layered with a thick Ukrainian accent boomed from the back narthex, "Please! For Christ's sake, do that! People are dying!"

Kaptur took a moment to let the comments sink in, then responded, "Sir, there are people risking their lives right now—from adjoining countries to Ukraine—to move arsenal into Ukraine. But what we don't want—we don't want nuclear war."

Ending her response, she tried to reassure those concerned about American inaction, "All of the free nations of the world are working together in a way that I have not seen since I was extremely young… I'm with you. We are fighting in Congress."

The final spokesman of the evening was Senator Rob Portman. Earlier that day on Meet the Press, he advocated for the immediate admission of Ukraine into NATO and imposing harsher sanctions on Russia, including adding all banks to the SWIFT ban. He spoke on the necessity for Americans to express unflinching solidarity with the people of Ukraine.

"This afternoon, we are all Ukrainian… And we ask God's blessing on the duly elected government of Ukraine. Duly elected… Finally, we ask for God's protection and we ask for courage and strength for President Zelensky."

He added insight on what he heard from Washington and Ukrainian correspondence.

"It seems to me that, as of this evening, the latest report that I got from Ukraine is that Vladimir Putin has bit off more than he can chew…. I will say my worry is, because of desperation, he will begin to deploy even more weapons, more tanks, more air power, more bombs, more missiles."

Closing, he addressed those within the US Congress who cast a belittling shadow on America's role in eastern Europe.

Father Michael closed out the sermon by administering a blessing. The choir led the congregation in an Orthodox hymn sung in Ukrainian, followed by God Bless America.

Before the service broke, Marta Keheller shared her final thoughts on the conflict.

"Sunflowers will not grow in Putin's shadow. Today is the beginning. And with the end not yet in sight, I call on the diaspora and our friends to hold fast. To victory—Slava Ukraini."