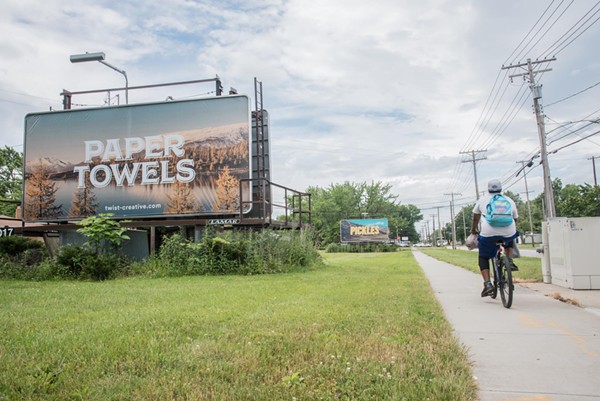 Photo via Twist Creative/Facebook
Two of Twist Creative's billboards seen around Cleveland, designed to provoke conversation.
A strange series of billboards have popped up around Cleveland this summer. They contain one word, an item you would typically find on a grocery list, along with a beautiful landscape portrait in the background and a small URL at the bottom.

Twist Creative, the Cleveland ad agency behind the billboards, says the series is meant to provoke conversation.

“Any good conversation needs a conversation starter,” Twist CEO, Mike Ozan recently explained to Adweek. “There is no better role for outdoor billboards than sparking an interest and simply suggesting a ‘want.'”

Going to the URL provided on the billboards leads to a series of questions intended to give feedback for Twist's experiment. They ask which billboard you saw, what it brought to mind and if you had a conversation about them with anyone else, among others.

Twist also shared what Clevelanders had to say about each of the signs with Adweek.

Here are some of the words Clevelanders would like to see on future Twist billboards:
-Tampons
-Vaginas
-Democracy
-Tampons (again)
- And "The word doesn't matter"

Photo via Twist Creative/Facebook
When people looked at the billboard that read "butter" some thoughts that came to their minds were "toast," "that's odd," "camping" and "giggles." Some people said they did have a conversation about the billboard while others said they did not, even though they have driven past it multiple times.

You can read more about what Clevelanders had to say about Twist's campaign here.