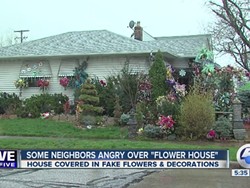 Courtesy newsnet5.com
Some neighbors are super angry about the so-called "Flower House" over on Lakewood Heights Boulevard and West 139th Street. It's not the first time they've voiced their displeasure either.

For the past couple of years, the homeowner has mystified and angered neighbors with their fake flower and holiday lights collection. Sounds harmless, of course, except the collection is prominently displayed all over the house and yard and neighbors say it's hurting property values. Complaints have steadily rolled in to the point of Councilman Brian Kazy stepping in.

“It is a pain, and we’re going to deal with it," Councilman Brian Kazy, who filed official paperwork with the city's Building and Housing Department to do something about it, told NewsNet5.

Turns out though, covering your house in, well, spring, isn't exactly against the law or any ordinances. In fact it seems to only empower the homeowner, who has since added even more more fake flowers to the fold. The homeowner has, however, put up structures (re: images of half-naked people on a door), that may help to get the get the squabble rolling.

Since the first official complaint is now closed, Councilman Kazy is considering mediation to quell the neighborhood squabble. In the meantime, he's meeting with the city again to look into what, if anything, can be done.