A hairdresser fights for truth, justice, and her client list.

Send a News Tip
Lydialyle Gibson can be reached at [email protected]. 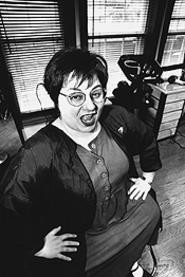 Walter Novak
Scissors beat paper: Felicia DeLappi, liberated hairdresser.
Not exactly your Sam Sheppard trial scene: It's 10 a.m. in the courtroom of Common Pleas Judge Ann Mannen, and a handful of people are quietly waiting for lawyers and the judge to emerge from her chambers. No photographers, curious crowds, or camera crews hover outside.

But there is a genuine urgency here, and forceful passions are stirring. Felicia DeLappi has come to fight a temporary restraining order that, for the past nine days, has prohibited her from doing what she loves -- cutting, coloring, and perming the hair of her 150 or so loyal clients. Filed by Dr. Michael Wojtanowski, DeLappi's former boss at the Ohio Clinic for Aesthetic and Plastic Surgery in Westlake, the restraining order, she estimates, has already cost her as much as $1,800 in lost appointments.

A large woman with short black hair and a helplessly roguish smile, DeLappi, 40, rocks back and forth in her chair, chatting with fellow defendant Ed Whaples. Also a hairdresser, Whaples, 28, owns Curl Up and Dye, the salon where DeLappi now works -- or would, were she permitted.

"I love your bangs," he chirps to DeLappi. "Did you do them yourself?" DeLappi confesses that she didn't.

"I knew I was going to have to leave," she concluded, when "they told me they might have to start taking a percentage of my credit card tips. I'm 40. I'm too old to take crap anymore."

So DeLappi packed up her scissors and client list, and moved to Curl Up and Dye, a salon nestled in a Detroit Avenue condominium, separated from the sleek glass building of the Ohio Clinic by only a narrow driveway. There was just one hitch: Back in 1997, DeLappi had signed a non-competition contract in which she promised, among other things, not to work within three miles of the Ohio Clinic for six months after quitting. Since the Clinic had broken its written promises to her, she says, she assumed the contract was void.

Her boss thought differently. On the advice of his lawyers, Wojtanowski, the chief of plastic surgery at Fairview Hospital, declined to comment for this story. But according to the complaint he filed against DeLappi, her misdeeds included not just setting up shop right next door, but "directly contacting plaintiff's customers by sending postcards, announcing her new position at Curl Up and Dye."

As a 14-year professional who trained in London and was once named Best Hairdresser on the West Side (by Cleveland magazine), DeLappi insists those customers are hers. "They get attached to us, not the salon," she says.

David Rowthorn, DeLappi's attorney as well as one of her clients, can testify to that. He drives from Pepper Pike to Westlake for his haircuts, and when DeLappi worked in Rocky River, he drove there. After she quit, he was surprised to receive a postcard from the Clinic entreating him to stay on as a customer. "They don't even know who their clients are," he says. "It's just people on a list."

Still, loath to let DeLappi -- and more important, her clients -- slip off to Curl Up and Dye, Wojtanowski sent separate letters to her and Whaples in which he promised to "vigorously enforce" the restrictions of the non-competition contract. When neither responded, he filed suit.

By 10:30, with no sign of the lawyers or judge, Whaples seems ready to burst. "I know you," he teases, crossing the room to Joan Stehlik, business manager at the Ohio Clinic, who has come in support of the absent Wojtanowski. "I do your mother-in-law's hair. She just loves me. I make her laugh." Stehlik, a little startled, smiles to play along.

The lawyers finally appear sometime after 11 and brief their clients on the agreement they've struck: In exchange for a quick trial date, the hearing is canceled and the restraining order has been lifted. DeLappi does some earnest dancing in the middle of the room, then turns to the rows of mostly empty seats. "There will be a trial here," she announces in a biting tone. "You are all welcome to come. Bring your friends -- we'll be serving drinks and refreshments."

Rowthorn is more serious. "This is ridiculous. It's a grudge match," he says. "Felicia's his cash cow, and he's losing her." He predicts that Wojtanowski will never see the suit through to trial. "If it were purely for business, he wouldn't have filed suit; he would be trying to rebuild his salon."

DeLappi, meanwhile, brandishes a fistful of photos that she says show Wojtanowski's mansion out in Avon. "Look," she says, sarcastically cheerful. "It's so big it can't fit in the picture."

"You see his house," Rowthorn chimes in. "He's a plastic surgeon. And he's going to be "irreparably damaged' if she's able to work as a hairdresser? Give me a break."

And with that, the troupe of Curl Up and Dye employees, lawyers, and well-wishers departs for lunch and cocktails.

The following Tuesday, DeLappi is happily at work at Curl Up and Dye, which, with its hardwood, plants, and coffeemaker, looks more like a home than a business. Holding up red, splotched hands, she moans with facetious drama, "Hairdresser's eczema. I'm tormented, like Michelangelo and his arthritis, but I still do it."

Dimitra Pasalis, 39, a DeLappi customer for five years, is having her hair colored. "I don't like them putting my hairdresser through hell," she says from under the curlers of dye. "I never heard of Ohio Clinic until she got there."

Whaples, dressed in a black hairdresser's smock, breezes through the salon offering coffee to everyone and calling customers "my love." Blithely unworried, even as he fields phone calls from lawyers every 20 minutes, he says he had no idea that Wojtanowski would actually file suit. "We really meant no harm," he says. "But we had to look at the decision of whether to stick with Felicia, from the hairdresser point of view."

On Thursday, as the trial date looms, the Clinic begins settlement negotiations, just as Rowthorn had predicted. After a couple weeks of bargaining, all parties sign -- and seal -- a confidential resolution. Everyone's sworn to secrecy now, but an earlier draft of the settlement granted DeLappi almost all the disputed clientele and the freedom to work at Curl Up and Dye.

With her legal battles behind her and a full roster of appointments ahead, DeLappi can relax. "Yeah, I'm happy," she says. "I'm back at work."