Clown Attrition Persists in Cleveland, But Art of Clowning Will Survive 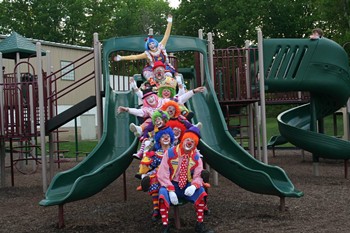 Courtesy of Bojangles Entertainment and Clown Co.
Bob Ukovic — Bojangles (front) — joins clowns from the Bojangles Clown Company.
The loss of about 1,000 members of the National Clown Organization over the past decade has caused some to fear the endangerment of clowns altogether. The decline across the nation has been blamed on attrition—and it is happening here in Ohio too.

After the 2010 passing of Bob Kreidler, founder and headmaster of the Ohio College of Clowning Arts, there are few obvious places for a wannabe clown to seek training in Northeast Ohio, as his legacy of laughs was discontinued because nobody took over the college.

But Cleveland’s clowns say the industry can survive without formalizing the training process. If an individual is serious enough about becoming a clown, he or she can make it happen by reaching out to local clowns for apprenticeships, attending conferences, or even Internet education.

The real problem lies in a shift in perspective on what it is that clowns do, according to Bob Ukovic—also known as Bojangles of Bojangles Clown Company.

“The art of clowning has changed," Ukovic says. "What’s happening is that the industry is getting watered down with people who want to make money off of balloon twisting and face painting alone. You get less of the original Abbott and Costello-type clowns. These clowns may look good, but in their heart they are not funny—just people with makeup on.”

As a graduate of the Ohio College of Clowning Arts and a close friend of Kreidler, Ukovic attempted to rework the college after it closed. Although Ukovic was ultimately too busy to take on the entire college with a business of his own to run, he has independently trained more than 300 clowns since 2000.

Ukovic teaches his students how to transform into a different person once they put on the makeup. Since he acts as more of a personal mentor than an institutional teacher, Ukovic switches up his lessons based on the individual’s unique interests. He hopes to begin teaching a night class at Brush High School for both adolescents and adults.

But movies often portray clowns in a negative light. So rather than associating clowns with joyful, pure characters, clowns are linked with horror.

“You get these kids who don’t realize what it is to be a clown,” says Ukovic. “Only about two to five percent of people are legitimately afraid of clowns; the rest is hype from the media.”

Indeed, the services of clowns—entertainment, juggling, skits, magic—are thriving, albeit, are often stripped of their clown-like nature.

The St. Ignatius Circus Company for high school boys, which provides strolling entertainment such as juggling and magic, emphasized that clowning is removed from what the members do. With St. Ignatius being a college preparatory school, circus acts are encouraged as hobbies rather than something that should be pursued as a professional art. But the reluctance of Ignatius students and the American youth alike to be associated with clowns may be a result of the increased expectation to thrive in white-collar environments rather than trades.

Even so, it is agreed that performing comedic acts has incredible benefits.

Art Thomas, moderator of the St. Ignatius Circus Company says, “It helps the students recognize they have a talent, develop the talent, and use the talent to entertain other people. It fits in with the mission of our school.”

Ron Fowler of Flower Clown Entertainment adds that clowning has brought him countless opportunities: "I love being a clown. It has changed me as a person. I used to be quiet and shy but when put on the spot, I change and gain confidence.”

Fowler always has his eyes and ears open for people with fun personalities, good wit and sarcasm who may be interested in learning the ropes of clowning as a professional art.

He says: “I used to teach the general public at my local library and at Lakeland Community College but I got too busy and haven’t for years. I do hold a class with the local clown group a few times a year. I guide the rest of the public who ask to learn to go on YouTube.”

But becoming a full-time clown requires more than just the bold decision to fill big shoes. Even Fowler, who has now been clowning full-time for 15 years, worked for tips as a clown on the side for three years before deciding to quit his daytime job as an engineer.

The decline in members of the National Clown Organization, according to Fowler, is more likely a lack of full-time clowns than a legitimate shortage. There are many clowns in Cleveland but they may not be regularly booking appearances due to other commitments.

He said, “My guess is if clowns are not out in public and doing parties then people don't think to hire one. (The disappearance of clowns) then becomes a supply and demand kind of problem.“

It has been my dream to be a journalist since age 12. Now that I work for Scene, my largest remaining life goals are to see Modest Mouse in concert and pay off my student debt before I die. Tweet @medialadymaggie
Read More about Maggie Sullivan
Scroll to read more Cleveland News articles