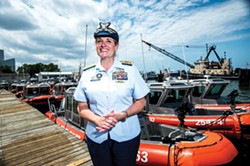 Photo by Ken Blaze
June Ryan, the Rear Admiral of the U.S. Coast Guard's 9th District (headquartered in Cleveland) has announced her retirement.

She told Cleveland.com that she and her family made the decision because they'd been bitten by the Cleveland bug.

Ryan's daughter, a student at St. Joseph Academy in West Park, loves the school and Ryan didn't want to risk being posted to another location and having to move. Ryan and her family live in Lakewood.

Scene featured Ryan in the 2016 People Issue (2017 Issue on newsstands now!), where we reported that she was the first woman in Coast Guard history to make the transition from an enlisted deckhand to an officer. She was also the first woman to lead the 9th District.

Ryan will be replaced in Cleveland by another woman, Rear Admiral Joanna Nunan.