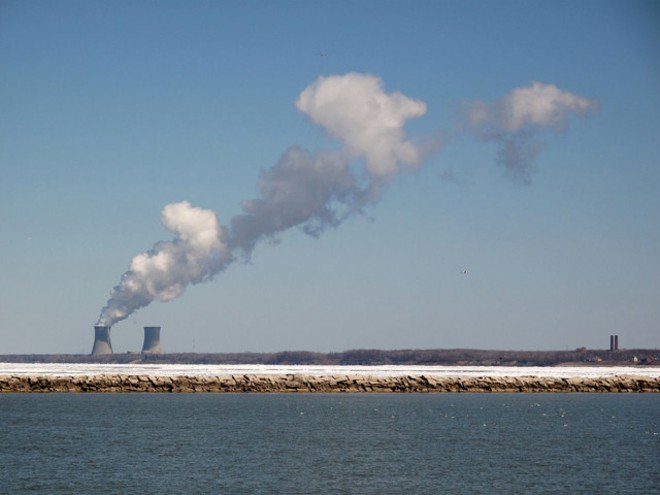 Photo via Wikimedia Commons
The Ohio House of Representatives today voted 51-38 to approve Senate amendments to a controversial bill that would prop up two nuclear plants and two coal plants while reducing mandates for renewable energy.

Democrats in the House and environmental advocates pushed back against the legislation, called House Bill 6. But Republicans say it will save ratepayers millions and provides ample alternative means by which to promote renewable energy beyond mandates.

The bill then quickly went to Ohio Gov. Mike DeWine, who signed the legislation into law today.

House Bill 6 will add an 85-cent charge to Ohio electric bills to raise roughly $150 million a year through 2027 to subsidize two nuclear plants in Cleveland and Akron owned by First Energy Solutions. The charge would start January 2021.

First Energy filed for bankruptcy in 2018 and has indicated it will begin decommissioning those plants in 2021 without state intervention.

The bill also allows utilities to charge as much as $1.50 a month through 2030 to prop up two coal plants in Madison, Indiana and Gallipolis, Ohio. Those plants are run by Piketon-based Ohio Valley Electric Corporation.

House Bill 6 also raises $20 million for solar energy, but would pay for the increases on customers’ bills by significantly reducing the amount of renewable energy power providers would be required to generate up to 2026, when the requirements would be eliminated entirely. The law would also eliminate energy efficiency mandates next year.

State Rep. Sedrick Denson, a Democrat representing Cincinnati, decried elimination of solar carve-outs and energy efficiency programs, saying the bill “effectively neutered” them. That will likely cost some of the 81,000 Ohioans who work in the renewable energy industry their jobs, Denson said.

Denson also opposed the provision that would help prop up coal plants, including the Clifty Creek Power Plant in Indiana. That plant is about 55 miles from Cincinnati.

“We’re keeping pollution flowing into Cincinnati for the next 10 years,” Denson said regarding the Clifty Creek Power Plant.

“Most of the elected officials at the statehouse are more concerned with making a bankrupt company happy and helping our public utility companies with their foolish investment in failing coal plants than taking care of their constituents,” he said at a news conference in Columbus before the vote. “Ohio should not be bailing out coal plants. It doesn’t make sense from an environmental or public health perspective.”

“It cannot bare overemphasis enough — this is a bailout for the ratepayers,” Seitz said today on the House floor. “Who benefits from this bill? Ratepayers. I can’t conceive of anyone who would vote against saving your constituents that amount of money.”

Democrats, however, see it differently.

“Ohio will have the dubious honor of being one of the only states in the nation that is reducing renewable energy standards,” state Rep. Casey Weinstein said today during debate about the bill.