City workers fight for their right to flee to the suburbs. 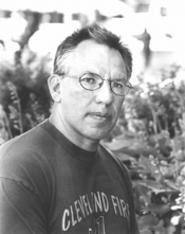 Walter Novak
Fireman Sam DeVito is leading the city workers' residency revolt.
The houses are big, the lawns are well-kept, and the breeze rolling off Lake Erie keeps the neighborhood tranquil and cool. Standing at the private beach club at the end of the street and watching the sailboats that dot the blue water, one might confuse Landseer Road with a quiet street in Lakewood, Mentor, or even Rocky River.

But Landseer is in Cleveland, a half-mile from the city's eastern border. There's something else about Landseer that's notable: More than a dozen houses on the street are owned by firefighters, police officers, and others employed by the City of Cleveland. In the Beachland neighborhood that includes Landseer, it's common to find city workers living next door and across the street from one another. That's also true in neighborhoods like West Park, Brooklyn, and the small strip of Cleveland that is part of the Shaker Heights school system.

This "Cop Land" phenomenon is attributed to the requirement that all city employees hired after 1982 live within the city limits. Now some of those workers are banding together in an effort to overturn the residency requirement, claiming it is antiquated and unfair.

"I feel it's our basic right to decide where to live," says Sam DeVito, the Cleveland Fire Department's point man on the issue. "The city is controlling our lives and our families' lives."

The residency requirement was passed by Cleveland voters in 1982, when the city was financially troubled and looking for ways to generate tax revenue, and city workers have been grumbling about it ever since. But now DeVito is trying an organized approach and building a coalition with other city employees, like the police and water department workers.

He is one of nearly 20 Northeast Ohio residents who testified before the Ohio House of Representatives earlier this year on behalf of a bill that would ban residency requirements statewide. (A corresponding bill is in the Ohio Senate.) A similar measure was passed last year in Michigan, but even proponents of the bill admit they face an uphill fight.

Whether the bills pass -- they are both in committee, and most observers say it's unlikely the bills will be voted on this year -- residency opponents have promised they will continue with their fight. DeVito notes that, when Cleveland's charter amendment passed, it only applied to future city employees, not those already on the payroll. "Now it affects more than half of the firefighters and police -- especially those who have children."

He notes that city employees are forced to send their children to the beleaguered Cleveland public school system or, more commonly, enroll their children in private or parochial school. He says it amounts to a hidden tax.

West Park resident Maria Walsh is a secretary for the Ohio Department of Corrections, while her husband works for the city water department. She says the residency requirement was not an issue when her husband took the job 12 years ago, but that changed once they had children. "Things change so much in a person's life. We have two children now, so we think of things differently. Education is the biggest thing to us now."

Cleveland City Councilman Mike Dolan, who represents West Park, empathizes with people like Walsh, but says lifting the residency requirement would harm his ward and other sections of the city.

"It would be devastating, because you'd have a bunch of "For Sale' signs posted up, and I think it would dramatically affect the housing values over here," says Dolan, who estimates about 20 percent of the 10,000 houses in his ward are owned by city employees. "I think there would be the perception that there is a loss of quality people in the neighborhood.

"The Cleveland schools are horrible, and the Catholic schools are not inexpensive. Very few people send their kids to public school. I don't know what to tell them," Dolan says, noting he'll be paying $2,000 to send his child to kindergarten. "Unfortunately I don't have a choice in the matter either, and I'm not real happy about it, but I don't know if I'd send my kids to public school if I lived in a suburb."

Dolan says that, despite the negatives, like bad schools and city services, there are benefits to living in Cleveland. "It's not suburban. It's not homogeneous in any respect."

Which may be the problem. Though no one says it, one wonders if the residency issue is one in which some whites only feel comfortable living in predominantly white areas.

Anthony Nickerson, an African American firefighter who lives on the Cleveland-Shaker border, says it is less a racial issue than an economic one. Because city employees are in a captive housing market, they often end up in bidding wars with each other for houses in the best neighborhoods. Indeed, a house in the northeast corner of Cleveland was recently appraised at $93,000; the owner expects to fetch $120,000.

"We're looking for a house now, and it's tremendously tough because of the restrictions," says Nickerson. "We want to live in an area that is safe, has good schools, and is a nice place to raise a family. I'd like to give my son the opportunity for a better school system, and I cannot, because the city is holding me hostage for tax purposes."

Nickerson, who works at the fire station at East 131st Street, also dismisses the argument that employees are better at their jobs if they live in the city they serve. He notes that a city employee can work on the West Side and live 30 minutes away on the East Side, but not five minutes away in Lakewood. "Half the firefighters at my station live in West Park."

DeVito points out that Cleveland police officer Robert Clark, who was killed in the line of duty in 1998, lived outside the city limits in violation of the city policy so his extended family could help care for his children. "Here's a guy who gave his life for the job, paid the ultimate price. You do your job. It doesn't matter where you live."

City Council President Mike Polensek's ward has the highest number of city employees on the East Side. Polensek says eight city employees live on his street alone, including police officers, a building inspector, and a traffic engineer. A father of five, Polensek says he, too, empathizes with the city workers because of the schools, but says they knew "the rules of engagement" when they took the job.

"I know no one wants to hear this, but no one is forcing them to be city employees. If you feel it's a detriment working for the city because of where you have to live, there's an easy option for you. You can leave," Polensek says. "There's no chain and ball on anyone."