Could the port relocation be Cleveland’s next great blunder? 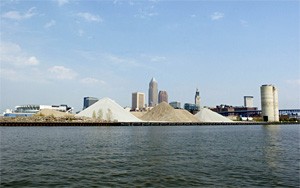 Walter Novak
Is the port relocation Cleveland's next major debacle?

If the thought of 10 Euclid Corridors scares you, perhaps you should take a closer look at Cleveland's port relocation plan. While freeing up the downtown waterfront sounds dandy, our city planners have proved to have all the foresight of that really cute 8-year-old in the special-ed class.

The port relocation is estimated to cost anywhere from $600 million to twice that, and take over 20 years to construct. As much as you love little Corky Jr., do you really want him playing with blocks made of gold bullion?

The Port Authority isn't exactly working to win your confidence. During its first public meeting in February, it limited public comment to two minutes per person, or just enough time to spit out, "Where do I sign?"

At the second meeting last week, it outlined a plan that would magically revitalize Cleveland's trade with Europe, create four jobs for every Clevelander, and get The Drew Carey Show back on prime-time television.

The board was in a giving mood this time, allowing three minutes of comments per person. But if the people who spoke were any indication, the prevailing sentiment is utter confusion.

What happened to the Waterfront District Plan?, they asked. How could it be scrapped so easily? And how are we going to connect trains to the new port? Will we have to build a railway bridge over the freeway? When are we going to recoup the billion-dollar investment? How about truck congestion on I-90? And is there any pizza left?

"I think I get more questions than answers when I come to these meetings," said one woman, before being shooed away as her three minutes elapsed.

Businessman Don Scipione best summarized the wariness of the average Clevelander: "I just pray that we do this right."

An MIA Council
Cleveland leaders have always been fond of talking about sharing the wealth. They've put plenty of high-minded laws on the books requiring that a portion of all public construction contracts go to minorities and women. But follow-through has never been their strong suit. And this year, they appear to have given up completely.

The Council committee charged with making sure contractors deliver on their promises to hire minorities and women has been conspicuously MIA. In fact, the committee met only once in the past six months — in January.

"It's not meeting. It's insane," says Councilman Zack Reed.

If the minority set-aside program had a reputation for running smoothly, this might not be a problem. But it has a rep for being a complete sham. White contractors routinely team up with black front companies, who simply lend their pigmentation to a project, while kicking most of the work and money back to whitey.

The chair of the affirmative-action committee is a historic warrior for the cause — Councilwoman Fannie Lewis. But Lewis has been ill for a long time and unable to attend many meetings. The weird thing is, no one has bothered to fill in during her absence. Which means nobody appears to be keeping an eye on the city's construction contracts.

Mayor for Life
In the midst of a federal trial, in which Woodmere Mayor Yolanda Broadie is accused of discriminating against white employees, the village council held a meeting last week. The purpose: To end mayoral term limits, thus allowing Broadie to continue to serve.

The meeting was sparsely attended; but the few residents who attended were not happy people. As soon as the council president called the meeting to order and asked if there were any questions from the audience, two hands shot up. One belonged to Bettie Perry, Woodmere's former mayor.

"With all that's going on with the Justice Department investigation, what is the urgency of bringing this measure now?" she asked.

Janet Beck, Woodmere's law director, began to answer: "It's the decision of the city council whether or not —"

"I know how the process works," Perry interrupted. "I want to know what was the council's big push on bringing this up now."

"This is not the kind of continuity Woodmere needs," Perry shot back.

From the dais, Broadie glared angrily at the former mayor.

The council voted to bring the amendment up one more time before it's put on ballots in November.

In the meantime, Perry mourns the corruption in the current administration. "Are we going to be stuck with a bad mayor for life?"