It doesn't matter if you're left or right. Bush is an embarrassment to real men. 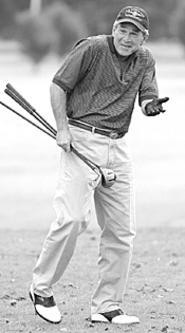 Getty Images
If Bush was a real man, he'd know he never earned his bones.
The man on TV swaggers like he's undefeated in 57 Collinwood bar fights. He threatens, he talks big, he's fearless. His are the pronouncements of a badass.

It's a noble thing he seeks. While the Manly Man has fallen from fashion, replaced by The Sensitive Guy who can cook a five-course meal while discussing his feelings of inadequacy, the rules for real men have been around for thousands of years, and they've always been simple and good:

You work hard. You provide. You look out for the weak and speak when everyone else is afraid. You make your shoulders available to those who need carrying.

It doesn't matter who you are or what you do. This is the one-size-fits-all path to honor.

Unfortunately, Bush, like so many others, confuses attitude with masculinity.

Jesus understood the rules. Now here was one tough sonuvabitch. He knew that to be a real man is to sacrifice, to walk it like you talk it, not wear it on your sleeve.

But Bush grew up with the trust-fund set, where no one knew the traditional ways. So he adopted the fraudulent version, like the gangbanger who waves a gun and thinks he's big, yet carries no one, provides for no one. This, unfortunately, is the definition of a punk.

If Bush understood the rules, there would be no swagger. The toughest fight of his life probably came in the third grade, when a tall girl kicked his ass and the Secret Service came to the rescue. The guy never earned his bones.

If Bush was a real man, he'd keep his sights on the real enemy, Osama, not pick an easier, more convenient fight with Saddam. It's like the guy who's called out by a big man in a bar, but decides to beat up a midget in the parking lot instead.

It was no sin to seek revenge on Saddam, who tried to kill his father. Real men understand the beauty, the necessity, of vengeance. But Bush had his chance before the war, when Saddam challenged him to a duel. A real man would have relished the opportunity, demanding to fight with knives, so he could kill Saddam up close, with his own hand. Yet Bush was a coward, choosing instead to burn 1,000 American lives and billions of American dollars, then play the cheerleader from thousands of miles away, lauding the heroics of men and women who were brave enough to do what he would not. A real man would never say "bring 'em on" from the safety of the sidelines.

If Bush was a real man, he would kick his swift-boat lapdogs in the head. It was no sin to stay clear of Vietnam; it wasn't our fight. But a real man never calls out the courage of those who went, and he sure as hell doesn't let his lapdogs do it. He does it himself, face to face.

If Bush was a real man, he wouldn't side with pharmaceutical companies against grandmas who can't afford medicine. There's only one choice in this fight: You go with Grandma. A real man would rather stick his face in an arc welder than abet the suffering of old people.

If Bush was a real man, he wouldn't run up deficits like a trophy wife. He'd respect and fear debt for the curse it is. He'd understand that he must pay his own way, leave a little extra for his children. Only a trust-fund kid believes he can spend without borders, knowing that someone else will pay.

If Bush was a real man, he wouldn't talk about the economy rising. He'd understand that a man's highest calling is a real job, with real pay, so he can put food on the table of his children, a roof over the head of his wife. He'd know that everything else is bullshit.

If Bush was a real man, he'd never pick a fight with gays. He'd understand the embarrassment in beating down those without power. It's like punching out a guy in a wheelchair, then pretending you're Shaka Zulu.

If Bush was a real man, he'd know there's no honor in being a country club tough guy, one who believes the work of men is to rattle their lips, then play another round of golf. He'd also know there's no righteousness in following the badass CEO model, guys who lays off hundreds to Wall Street cheers for making the tough call, but never do any of this face-to-face, and never put themselves on the line.

Because if Bush was a real man, he'd know this code transcends left and right, rich and poor. It's been around forever, and has nothing to do with the squawking parrots in the Capitol or on cable. It's about standing up. Doing what's right. Honor.

And if Bush was a real man, he'd know that even an Ivy League cheerleader can achieve it. All you gotta do is try.

But if Bush was a real man, he'd man up right quick. Because he'd know he's embarrassing us right now.