Miller brought receipts in a letter to Quinn 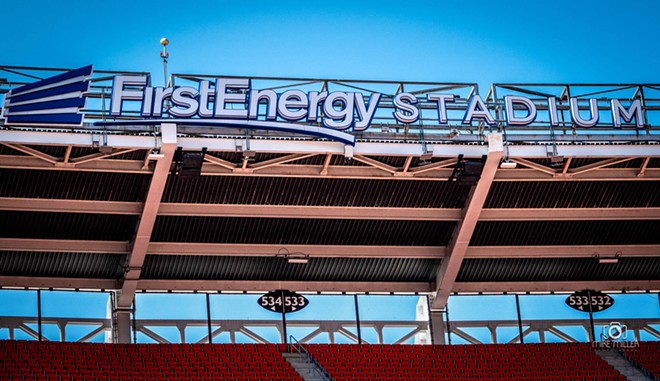 On the latter point, Durbin wrote: “There have been reports of Cleveland Browns owners planning to seek significant renovations or even a new stadium at a cost of about $1 billion, a significant portion of which would likely come from city and county tax dollars.”

Those reports, specifically about the Haslams wanting a new domed stadium, came last summer from NEOtrans Ken Prendergast, whose reporting on the topic was aggregated by local media outlets, including by Cleveland.com in a story headlined, "Cleveland Browns reportedly want new $1 billion stadium, likely publicly funded."

After the publication of the story about this week's county council subcommittee meeting, Cleveland.com/Plain Dealer editor Chris Quinn used his daily morning text message to subscribers to address the topic.

“$1 billion dollars to upgrade FirstEnergy Stadium? That nugget comes from a Cuyahoga County Council meeting on coming budget challenges," he wrote. "We've known that the Browns want upgrades, per their contract, but we've never heard anything like a billion dollars. [Editor's note: see Cleveland.com story linked above.] For a facility that is used maybe 10 times a year? Also stated is that the city and county taxpayers will be on the hook for it. Who says? Because the council squandered $66 million on such funds and $40 million on the failed Med Mart last year, the county has no money, and it needs to build a jail and courthouse. We're digging in on the football stadium. Have these talks been in secret?”

County councilman Dale Miller, who was quoted extensively in Durbin's piece, was clearly irritated by the suggestion in the last sentence.

In a letter to Quinn, that was also distributed to many others, Miller responded.

I’m writing to respond and correct the record regarding your text message to your readers on January 18 about County Council’s Finance & Budgeting Committee 2022 Year-End Report. Your text message does not reflect what your own writer reported.

However, contrary to your text, the committee’s year-end report did not attach a “billion dollar” price tag to First Energy Stadium, nor was any specific cost mentioned in the committee discussion. Given your own outlet’s reporting of the possible price tag, to say that you “never heard anything like a billion dollars” for this project and to falsely suggest that Council has engaged in “secret talks” is irresponsible.

I desire to be clear that I have no concerns at all about Kaitlin Durbin’s article. She accurately reported that I named First Energy stadium as a possible future capital project. It was perfectly appropriate for her to add context by correctly stating that “there have been reports of Cleveland Browns owners planning to seek significant renovations or even a new stadium at a cost of about $1 billion.” It is your inaccurate follow-on that is problematic.

Cleveland.com has urged County Council to be more active in providing effective oversight of the administration. The committee report clearly reflects such action, in that the report identified potential financial challenges going forward and listed eleven areas worthy of Council oversight from the committee in the coming year. The report also reflected a big-picture, long time-frame mindset in urging that the Council assist in financial planning with a view toward the next couple decades. To omit First Energy Stadium from my list of pending major capital projects would have been erroneous and incomplete. If and when the issue arises, Council will fully comply with the state’s Sunshine Law, including ample opportunity for timely public discussion and input.

You have a responsibility to get your facts right and not cast misleading aspersions, especially when your statements are contradicted by your own paper’s reporting. I recognize and support the role of the press to shed light when government acts contrary to the public interest, but being accurate and fair adds to that process, rather than detracts. You can be better than what was reflected in your text message, and I call on you to do so.


These arrangements, including the Q-Deal and Progressive Field renovations, always get hashed out in private before they're publicly unveiled. Quinn is not wrong in that regard.

But Miller isn't wrong that Quinn didn't know what his own paper had reported not a year earlier and cast blame in the wrong direction.

Quinn has not publicly responded.