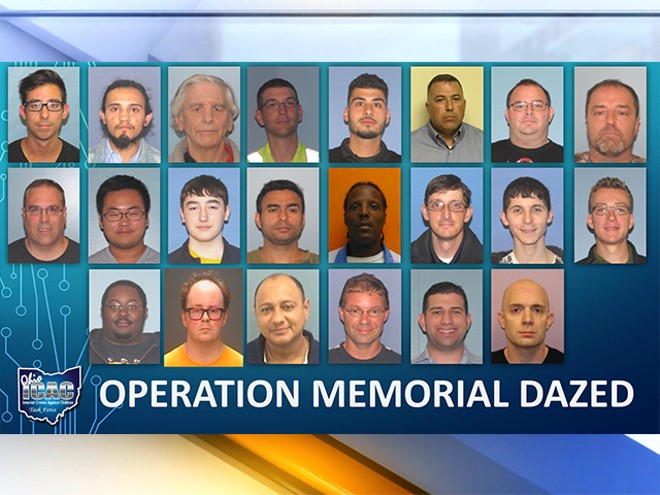 Courtesy of Ohio Internet Crimes Against Children
Officials announced today that an undercover sting operation called "Operation Memorial Dazed" has led to the capture and arrest of 22 men from the Cleveland area on several sex charges involving children.

Operation Memorial Dazed's investigation spanned between eight to 10 months, and the sting operation occurred over a four-day period after Memorial Day weekend.

Officers conducted the sting out of a home in Newburgh Heights, where the suspects would arrive thinking they were going to meet a child for sex, but were instead handcuffed by an officer hiding behind the apartment's front door not unlike the tactics used on To Catch A Predator.

Agents with the task force used social media and messaging apps to get in touch with the men, then posed as children between the ages of 12 and 15 and chatted with them, according to Internet Crimes Against Children (ICAC) commander David Frattare.

Suspects are accused of having sexually explicit conversations with and sending explicit images online to individuals they thought were children. Some offered drugs and alcohol to the child they thought they were communicating with online, and many propositioned the alleged children for sex.

According to authorities, three of the suspects arrested were already registered sex offenders, but all 22 were indicted on Tuesday on charges including attempted rape, corrupting an individual with drugs, importuning, and attempted sex with a minor.

The three registered offenders are Scott Turner, Sr., David Dinard and Nicholas Robinson, all from Cleveland.

Editor's note: One of the 22 men arrested in the sting was Philip de Oliveira, a freelance contributor to Scene. We were made aware of that information late Wednesday morning and have severed our working relationship.