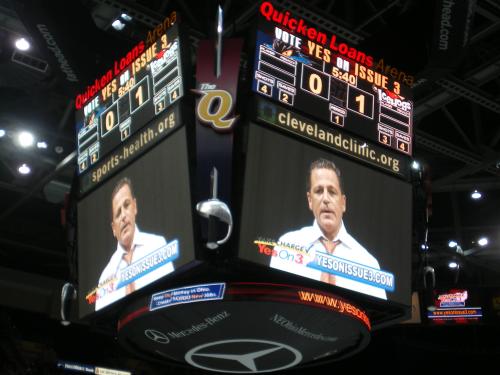 As I've mentioned before here, you can't go to an event at the Q without being inundated with "Vote Yes on Issue 3" messages. Videos are on the scoreboard, ads are plastered everywhere, Issue 3 employees and volunteers are ubiquitous, and the owner himself, Mr. Dan Gilbert, will not let you enjoy one moment of peace until you've heard his voice proclaiming loudly that you must vote yes to keep jobs and money in Ohio.

Regardless of which way you feel about the issue of building casinos in Ohio itself, you probably also have a separate opinion on the blurry approach to good taste that Gilbert is taking in using the Q as his dedicated and personal podium for the issue. You can't blame the guy for taking advantage of a captive audience, but the levels to which he has taken it are absurd.

On opening night he gathered 200 season ticket holders into a room and did a powerpoint presentation. He's doing another one today according to a Cavs press release. This hasn't gone unnoticed around the national media either. Yahoo! chimed in today in the middle of story about the Cavs starting the season 0-2.

It isn’t the worst thing for the Cavs that they’ll stay out on the road this week because back home owner Dan Gilbert has turned Quicken Loans Arena into a campaign headquarters to get a casino gambling proposition passed in the state of Ohio. Gilbert stands to make millions upon millions building and operating casinos in the city and throughout the state. The barrage of propaganda that overtook the Cavs’ opening night loss to Boston was embarrassing and beneath the standards — however loose — of good taste in the NBA

No one should have to buy a ticket to a basketball game and watch the owner turn the event into a political rally for his own personal gain. It felt like winning Issue 3 in Ohio was far more important than beating the Celtics, and that was a distracting vibe with which to start the final season of James’ contract.