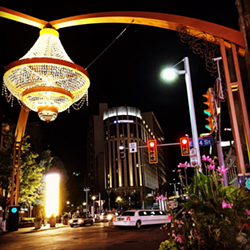 Destination Cleveland
Wednesday afternoon, a contingent of RNC reps visited Cleveland City Council for a good old-fashioned briefing. Safety Committee Chair Matt Zone had convened the meeting to ensure that his council colleagues were adequately apprised of security preparations for the July convention.

The proceedings' first half, witnessed by an army of local media members and various RNC attachés, was mostly cheerful assurances that Cleveland would be fully prepared.

Among the small-scale revelations:
Before the RNC crowd skedaddled to the Q, where they were set to give a tour of the convention facilities to upwards of 600 visiting media personnel, David Gilbert mentioned an op-ed from the Kansas City Star that he'd been sent that morning.

"It really angered me," he said. "Basically, it said, boy, it's a good thing [Kansas City] didn't land the convention. And what I didn't like about it was that it made several knocks on our city. It really, really got me. You all should read it — you'll get angry as well."

Gilbert offered a corrective: "It's sour grapes. We are already reaping huge benefits from hosting this convention, and the eyes of the world are on us."

The piece in question, titled "Maybe Kansas City dodged a bullet when Cleveland nabbed the GOP Convention," does indeed open with the hackneyed "Mistake by the Lake" jab, but otherwise focuses on the unpredictability of any large-scale event at which Donald Trump is (or could be) the center of attention. The editorial is inelegant in its construction and non-persuasive in its arguments. It even closes with this weird bit of analysis:

"[Cleveland] is famous for the Rock and Roll Hall of Fame and Museum and the Cleveland Metroparks Zoo. It is the city where Superman was created by writer Jerry Siegel and artist Joe Shuster in 1933. Cleveland will need all of that and more to offset the image change that the GOP gathering could bring for the city of 390,113."

The point is KC got a chance to pimp its Janet Jackson concert and what sound like two absolutely electric national conferences they're hosting while Cleveland hosts the RNC: the National Association of Free Will Baptists and something called "Silpada Designs."

But the "Mistake by the Lake" stuff nonetheless rankles Gilbert — #ThisisCLE's progenitor and sultan — and it's only natural that it does. His whole project at Destination Cleveland has been reshaping locals' perception of their hometown so that they might more aggressively preach its gospel.

The good news for Gilbert is that his efforts are yielding visible results. Have a look at the comments section of the Kansas City Star piece. It's awash in Cleveland natives (or transplants) ragging the paper for lazy journalism and calling the editorial board out, repeatedly, for the "Mistake by the Lake" usage.

"Your editorial board could have written the same piece without the trite "Mistake by the Lake" tired old insult," wrote Lawrence Chance, from North Carolina. "Work a little harder."

"Mistake by the Lake? How original, you obviously haven't been to Cleveland in the last 5 or 10 years," wrote Ryan George.

"Hateful statements like the crude "Mistake on the Lake" are passé, degrading, and frankly not true any more," wrote Rick Dudas.

It's wild. Almost without exception, the comments sang this tune. And thanks to the fact that, unlike Cleveland.com, kansascity.com's comments aren't anonymous, the civility of the discourse is drastically improved.

"Poor Kansas City," (a bottom-rung example, here) "Bad mouthing The Land because you guys are obviously butt hurt From Everyone here in Cleveland G-F-Y !"

For Gilbert, and for other onlookers, the outpouring of digital opposition to any negative mention of Cleveland can be seen as progress. It would seem to confirm that Cleveland rocks.

But then there's the dissenting view, which we reported after the first Republican debate in Cleveland in August:

The fact that every Cleveland resident with a Twitter account feels compelled to defend it to me would seem to confirm that Cleveland sucks.