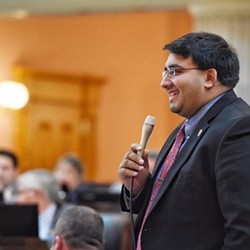 Twitter: @NirajAntani
After the Parkland shooting, the policy solution advanced by the most hogtied australopithecines within the Gun-God-Business Party's Gun wing was — go figure — more guns.

"If they can make the conversation about arming teachers last a week or two," wrote Dave Karpf, (in a Tweet thread reprinted by Vox), "then they can duck the conversation about their indefensible positions [defending the gun show loophole, opposing an assault weapons ban]. And then some other tragedy will probably happen. (Deporting the DREAMers, global war, etc.)"

But like good whoopee cushions, a legion of right-wing lawmaker goons answered the call of their overlords and began fiendishly embracing-slash-promoting the "Arm Teachers" nonsense. Teachers and students gazed with bafflement at these assholes as the tears were still drying on their cheeks.

But the idea, like other bad ideas pushed by moneyed interests, managed to pick up steam. And as it was doing so, a teacher with a gun was taken into custody in Georgia, instantly validating the concerns of those opposed to the idiotic proposal. (No students were injured in that incident.) Many horrified Americans with a sardonic edge had some version of the following reaction:

it appears that the only way to solve this is to arm the children https://t.co/pfSAYNxufa

State Rep. Niraj Antani, a Gun-God-Business nut from Miamisburg, down near Dayton, actually believes this to be the case. He thinks that all God-fearing responsible gun owners who are at least 18 years of age (SENIOR YEAR BABAAAAY!) ought to be able to bring their "long guns" to school.

(It pains the mind — but the soul most of all — to envision scenarios by which this policy preference would lead to catastrophe. "Are you here to kill your classmates?" Teachers would presumably have to inquire in this idealized learning environment dreamed up by Ohio Buckeye Firearms Association-homeslice Niraj Antani. "Or are you a responsible gun owner toting your AR-15, just cuz?")

Antani's making headlines for a Twitter exchange on the subject he had this week with his opponent, and for subsequent comments.

Students deserve a chance to stand their ground and defend themselves.


Antani followed up that gem with: "The more people who carry, the safer we all will be." But when a Twitter user asked, "based on what evidence?" Antani had no reply.

(The HB233 mentioned above, by the way, would allow a concealed handgun licensee or military member to carry a deadly weapon into a gun-free zone, and avoid punishment, so long as the person leaves upon request and doesn’t return with the weapon within 30 days. In other words, it would make 'gun free zones' — schools and churches chief among them — no longer gun free. Antani's a co-sponsor.)

In follow-up comments, Antani has called the headlines and stories written about this stuff "clickbait." Karen Kasler, from the Ohio Public Radio Statehouse News Bureau, even mentioned on WCPN's Reporters Roundtable that she'd spoken with Antani, and he told her it's not like he intended to propose new legislation re: 18-year-olds bringing their rifles to school. (He's got HB233 to lobby for, after all.) This is just how he feels.

On social and in traditional media, he has argued that his comments were being misinterpreted because of "cultural differences."

“You go out to Valley View, in my district, you go shooting against a rock in your backyard … it’s part of the culture there, it’s not a big deal,” Antani told the Dayton Daily News. “Of course, in inner-city Dayton Public it would be a big deal, but there is a cultural difference … In rural America, there is a culture of carrying firearms safely. In any urban area, such as Dayton Public, there is not. In Dayton, unfortunately, there is a lot of gang violence, and firearms are used improperly.”

Well, this all sucks!