Ashland University may be a small liberal arts school, but its politics are right with Reagan. 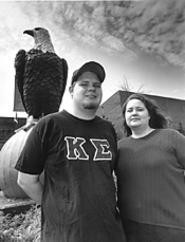 Walter Novak
Hawks and eagles: Ashbrook scholars Dan Tierney and Beth Vanderkooi, with campus mascot Old Abe.
On November 1, 1996, presidential candidate Bob Dole began his final, 96-hour campaign drive in Ashland. A small college town might have seemed an unlikely place for Dole to commence his campaign-a-thon, but Ashland made sense for a couple of reasons.

One, no one since John Kennedy has won the presidency without winning Ohio. Two, Ashland is a conservative Xanadu. Every year, the university's John M. Ashbrook Center holds a memorial dinner. The first speaker, in 1983, was Ronald Reagan, and Margaret Thatcher, Charlton Heston, Henry Kissinger, and Clarence Thomas are among those who've addressed the dinner in the years since.

Ashland is 30 miles due south of Oberlin, but the two liberal arts colleges are as distant as Mars and Venus. At Oberlin this spring, civil-rights activist Julian Bond and the director of Africana studies at Vassar have lectured. Ashland recently held a luncheon keynoted by economist Alan Reynolds, one of the original supply-siders and a senior fellow at the Cato Institute.

Ashland has always been a conservative place. The town founded the college in 1878 on the suggestion from members of the local German Baptist Brethren Church. The school's theological seminary is the 12th largest in North America. The campus is dry.

The death of a congressman established Ashland's ties to the political right. Johnstown Republican John Ashbrook was conservative when conservative wasn't cool. He worked on the movement to draft Goldwater in 1963 and was an early champion of Reagan. Aghast at Nixon's liberal tendencies, he mounted a brief presidential run. In 1982, he collapsed from an internal hemorrhage while campaigning for the U.S. Senate and died a month later.

To memorialize Ashbrook, his supporters endowed a center for public affairs at Ashland, the only college in his congressional district. The center is like a college within a college. The 60 Ashbrook scholars attend seminars, chat with visiting dignitaries, and receive a $2,000 yearly stipend. They leave the program wise in the works of Plato, Machiavelli, Locke, Jefferson -- thinkers multiculturalism has crowded off the reading lists at most colleges and universities. "We don't do public policy," says Peter Schramm, the center's executive director. "We introduce kids to the big political questions. There's no such program like this in the whole country."

Most scholars, like most regular Ashland students, come from Ohio suburbs and hamlets, and they tend to be religious and conservative. Junior Michael Donatini is a townie. His first exposure to the center came at age 13, when he sang with a chorus at an Ashbrook dinner. In addition to editing the student newspaper, he co-chairs the campus Right to Life group. The Ashbrook Center didn't make his conservatism -- he was already there -- as much as reinforce it. "A lot of people come in Republican and move even more to the right," says Dan Tierney, an Ashbrook from Trumbull County.

To no one's surprise, Ashland student government is thick with Ashbrooks. Presently, student leaders are debating whether the health center should provide condoms. Tierney, vice president of the student senate, opposes the idea. It's not the sex he minds -- "I have condoms in my room," he says -- but the university getting into the birth-control business. Others take a more prurient view. "It amounts to condoning premarital sex," Donatini says.

There are few lefty Ashbrooks. Betsy Decillis, a senior from upstate New York, holds Mario Cuomo and Hillary Clinton as political heroes. Last year, she founded Ashland's branch of Young Democrats. Decillis has grown accustomed to fellow scholars attacking her liberal positions. She's at least learned how to cross rhetorical swords. "They're more vicious than what I'm used to, but I'm able to handle it."

If Decillis had it to do over again, she says she wouldn't go to Ashland. Politics isn't the only reason, though she didn't expect to be so outnumbered by right-leaning students. She's also been disappointed by the sameness of Ashbrook Center guest lecturers. In one interrupted stretch, students heard from the American Enterprise Institute, the National Review, The Weekly Standard, and The Wall Street Journal editorial page. "I don't think it belongs on a liberal arts campus," Decillis says of the Ashbrook Center, "because it only presents one side. Basically, I go there to be ranted at."

The Ashbrook Center doesn't call itself a bastion of conservatism, preferring instead to use code phrases like "individual liberty," "limited constitutional government," and "civic morality." The message, however, should be clear. Dan Quayle is pictured twice in the application, indicating a fondness for even the dullest of Republicans.

Still, the center seems to want it both ways. Schramm speaks frequently of the program's academic rigors, and its stated purpose is "to broaden and deepen a student's thinking about public affairs and American politics." But the center's lecture series looks more like troop-rallying than educating. The three speakers on Ohio's schools were all for privatization. The series on America at the turn of the century featured a talk by Wheel of Fortune host Pat Sajak on accuracy in the media. (May I have an "L," as in liberal, Pat?)

"He was wonderful," Schramm says of Sajak. "He didn't talk policy, really. He just sort of chattered on about stuff. He's a wonderful, delightful guy. I guess he's sort of conservative. I just happened to know him; that's why I brought him in."

A few faculty members regret how Ashbrook's conservatism wafts over the campus. English Professor Deborah Fleming says that the Department of History and Political Science seems to be under the sway of the center. "They argue that when they hire new people, they choose the 'best person,' but somehow the best person always turns out to be a white male with a conservative bias," she says.

History and poli-sci department chair C. Bradley Thompson greets Fleming's assessment with a long, loud laugh. He says his crew of professors is "an all-star group of faculty" and "pound for pound, inch for inch" the best of its kind in the state. "This department is the least politicized on campus," he says.

Besides, there are plenty of other liberal arts schools where the politics tilt to the left. As Schramm likes to say, "This is the John Ashbrook Center, not the Lyndon Johnson Center."