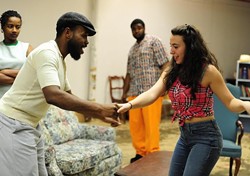 Times of crisis certainly bring out the humanity (or inhumanity) of people, as we have seen during various tragedies such as Hurricane Katrina. Those moments can be startling and clarifying.

There are two crises at work in Detroit ’67 by Dominique Morisseau, now at Karamu House. But the interplay between the two events—one personal and one community-wide— doesn’t exactly benefit either one. In fact, they actually minimize each other, which is clearly not the intent.

Siblings Lank (short for Langston Hughes) and Chelle (short for Michelle) are working to turn the basement of the home their parents left them into an illegal after-hours drinking spot. While Chelle (sharply played by Phillia) is jazzed about this idea, Lank and his pal Sly (short for Sylvester) have their eyes set on buying an actual bar and running a business.

There is some mildly amusing interaction with a new 8-track stereo that Lank (an appealing Ananias J. Dixon) and Sly have purchased to replace the old phonograph player in the basement. And the old tunes coming out of that equipment are sweet.

But then everything changes when Lank carries a large bundle downstairs and it turns out to be an unconscious young white woman named Caroline. He and Sly saw her wandering the street, groggy and beat up, and decided to bring her to Lank’s home.

That in itself is a strange choice, and it just gets weirder from there. Once she is revived, Caroline asks to work as a bar girl in their rec room/club, since she has no purse and nowhere to go. Lank and Chelle agree until Chelle spots her brother and Caroline sharing a quiet moment of friendship and questions Lank’s motives. Meanwhile Chelle’s friend Bunny doesn’t understand what’s going on at all.

It’s pretty easy to agree with Bunny and her smart ass wisecracks, since this really doesn’t make much sense. But the clunky plot device allows the playwright to comment on race and how fate and friendships are affected in tumultuous times. These comments come into even clearer focus as the Detroit riots of 1967 begin to erupt outside their house.

The trouble is, this basement-focused play takes place underground in more ways than one. Lank and Chelle never seem connected to their community in a palpable way, and when the violence ignites above ground, the siblings seem oddly detached. Brandon Brown as Sly and Jameka Terri as Bunny are more emotive, but they often speak too quickly or at the wrong volume for their words to be heard clearly.

As for Caroline, we get a bit of back story relating to her physical injuries, but Joelle Sostheim never quite succeeds in making Caroline a believable person in the odd situation that the playwright has created. Even a tragedy in the second act doesn’t rouse this play from the dramatic doldrums.

Director Justin Emeka is hamstrung by the script, to a degree, which may help explain the rather soporific pace. Plus, the use of video footage taken at the time of the Detroit riots feels tacked on and not particularly relevant to these characters.

There are important things that need to be said these days about how justice is rendered in this society when it comes to African-Americans. But this play seems to duck the hard issues raised by that riot and settles instead for some easy moralizing set to the comforting melodies of those Motown classics.