Development Proposals Are In for the Former Lakewood Hospital Site 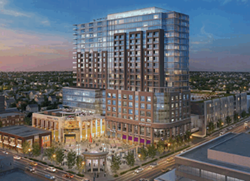 CARNEGIE
That would be the corner of Detroit and Belle, for those wondering.
The city of Lakewood is showcasing two proposals for the available space left over after the Lakewood Hospital transaction, and both feature glitzy mixed-use development that will fundamentally alter the downtown neighborhood. For those paying attention, that was the point all along.

Both Casto and Carnegie were granted "finalist" status, and both have pitched mid- or high-rise concepts for the Marlowe and Belle stretches of "downtown Lakewood," which is a branded portion of Detroit Avenue. The projects are pretty similar, in that retail and upscale residential would be paired in fairly shiny environs. Lakewood really has nothing like this right now, with the Gold Coast being the only thing that really comes close — visually at least.

CASTO
No retail tenants have been finalized in either plan, though there seems to be plenty of space to court prospective businesses. Casto adds a good deal of green space ("The Green," for events, and "The Grove," for enjoying a public fountain). Carnegie favors a banquet hall as an anchor space and a bevy of high-end residential amenities, most of which are in short supply among the city's agi ng housing stock.

Note that former Mayor Ed FitzGerald is working as the economic development adviser for Carnegie. FitzGerald was running the city when the Lakewood Hospital Association unveiled the Vision for Tomorrow plan, which marked the hospital as a center of excellent in four specialties while stripping the facility of, e.g., its trauma and pediatric programs. That moment in Lakewood Hospital history is vital in understanding how the LHA and the city got to the point of selling off the hospital and moving forward with this redevelopment plan.

The city's Architectural Board of Review and Planning Commission will host a public meeting at 6:30 p.m. July 25  at City Hall to dig into these proposals on a more in-depth level. No decision will be made until later this year.