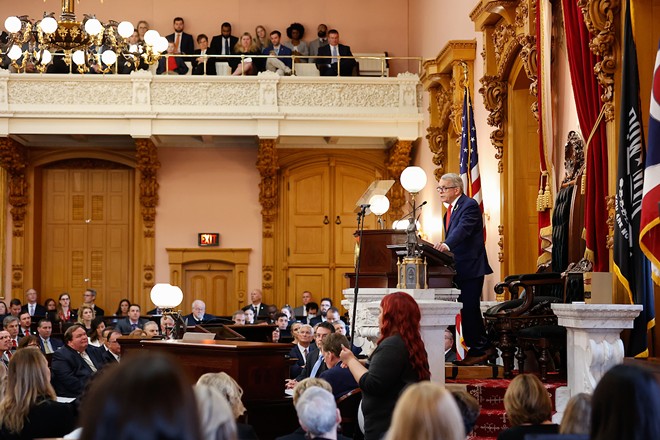 (Photo by Graham Stokes, for the Ohio Capital Journal.)
Ohio Gov. Mike DeWine at the Ohio Statehouse in Columbus.

Gov. Mike DeWine recently sent funding from a federal program for needy families to benefit state organizations specifically to reduce “out-of-wedlock pregnancies” and to “encourage the formation and maintenance of two-parent families.”

The funding also targets programs for adolescent pregnancy, a source of controversy as state abortion restrictions could increase the need for such programs.

A recent executive order by the governor took some of the $13 million designated in the state budget for Temporary Assistance for Needy Families (TANF), a federal program where monies are passed down to the states to be used for low-income support, and passed it on to several religious-based organizations and programs who are listed as resources for pregnant women and at-risk children.

The executive order allocated a majority of funding to area food banks and food assistance programs, but other funding was sent to organizations with the goal of moving forward with pregnancies or education about pregnancy that does not include abortion.

TANF monies funneled through the Ohio Parenting and Pregnancy Program, which DeWine has done in previous executive orders, can only go to programs in the state that “promote childbirth, parenting and alternatives to abortion,” according to the Ohio Revised Code.

DeWine allowed up to $50,000 to be sent to Rosemary’s Babies Co., “to provide pregnancy services to at-risk mothers, ages 13-19” in Hamilton, Butler, Warren and Clermont counties, while the YMCA of Greater Cincinnati, whose website touts a mission of putting “Christian principles into practice through programs,” received up to $50,000 to “provide pregnancy services to adolescent mothers” in Highland, Hamilton and Clermont counties.

Another $50,000 is going to the Ohio Valley Youth Network to provide, among other things, pregnancy prevention support for grades 5 through 8 in Jefferson, Harrison and Carroll Counties.

The order came after Ohio officials, including state Attorney General Dave Yost, got into hot water after making comments questioning the story of a 10-year-old rape victim who had become pregnant and had to go to Indiana for an abortion because of the six-week abortion ban implemented in Ohio after Roe v. Wade was overturned by the U.S. Supreme Court.

DeWine has refused to comment directly on the impact of the current abortion restrictions on children and child rape victims, or more severe restrictions that could be put in place if Republicans in the Ohio legislature have their way.

With the new abortion restrictions and a lack of sex education standards (and abstinence-only education in some areas), child advocates have predicted a rise in teen pregnancy in Ohio.

The Father’s House, a “multi-generational, multi-cultural church” in central Ohio will receive up to $200,000 to provide “food security, mentoring and pregnancy prevention services” in Franklin, Fairfield and Licking counties.

While intended uses for the dollars are spelled out in the orders, Ashley Underwood, a Northeast Ohio native and director of the national research and advocacy group Equity Forward, said many times the dollars go toward administrative costs instead of services.

Equity Forward, which mainly focuses on reproductive rights and LGBTQ issues, is conducting research on the use of TANF dollars from state to state. While also looking at the work Ohio does to direct funding to anti-abortion groups, the group says the resources touted may not be what the funding ends up supporting.

“An overwhelming majority of these funds are being used for overhead costs, salaries and marketing of services or other programs,” Underwood told the OCJ.

Public records requests received by the group in 2020 showed of the $1.85 million received by Elizabeth’s New Life Center — a crisis pregnancy center that received another $300,000 in TANF funds from a previous executive order by DeWine — spent approximately 70% in the first year of the grant on personnel costs, “fringe benefits” and “marketing and media.” The “fringe benefits” were not defined in the documents.

Documents for the second year of the grant showed personnel costs jumping to more than $600,000, while “participant education” decreased to $13,329.

Part of the problem Underwood sees with the way funding is used in Ohio has to do with the federal language for TANF. DeWine’s executive order mentioning reducing “out-of-wedlock pregnancies” and promoting “two-parent families” uses federal language that is seen as outdated, especially for those that choose single-parenthood or don’t choose marriage before having a child. This language can also allow states to have more discretion on what these words mean in terms of funding.

“It’s stigmatizing language that isn’t up-to-date with what society is,” Underwood said. “It doesn’t align with what a family may mean, and that’s a broader issue of expanding the definition of families.”