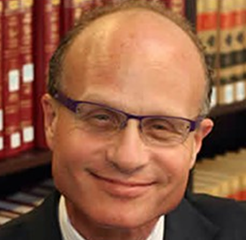 Lawrence Mitchell is now Ezra Wasserman Mitchell. That matters very little to most people but for some others it's certainly worth noting, because Lawrence Mitchell was the former law school dean at Case Western Reserve University. Former is the key word there. Mitchell departed after the school settled a sexual harassment and retaliation lawsuit that, among other things, included multiple allegations that he'd propositioned students for threesomes. He's dipped off the radar — moving away from Cleveland and recording himself reading creepy poetry — and now, Lawrence Mitchell is off the radar altogether.

In a post on his site Mitchell announces that he's changed his name to Ezra Wasserman Mitchell. (Here he is on Facebook, btw.) It's a lengthy and circuitous treatise that we're sure is filled with thoughts and motivations that matter deeply to Mitchell, who, as he writes, positions himself as the "Jewish Kunte Kinte." That's all well and good but what it fails to mention (not shockingly) are the string of allegations of repeated sexual harassment that led to his ousting at CWRU. That's worth noting, if not there, then here.