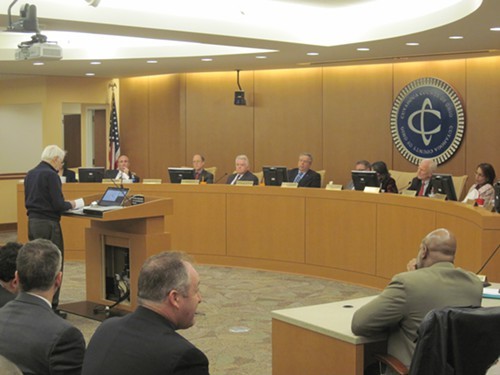 Members of the public listened to impassioned pleas from Indians, Cavs and Browns' top brass today. The sports management leaders, in short, want to continue the running tap of tax dollars to rehab their stadiums.

The teams' reps rattled off their respective wish lists and financial specs during a County Council hearing on Tuesday. In sum, repairs to FirstEnergy Stadium will total $80 million; repairs to Progressive Field will total $60 to $70 million; and repairs to the Q will total $55 to $65 million (all figures are over the next 10 years). The big question on the day was what, precisely, the teams were looking to buy and/or repair.

"This is about so much more than scoreboards!" Jim Roman of the Greater Cleveland Partnership said, citing the oft-reported upgrades at FirstEnergy Stadium. The teams provided lists of what they'd hope to cover with the money - including air handling units, sound systems, escalators, water heaters and, over at the Q, an HD-video scoreboard.

To get to those details, those in attendance had to wade through all sorts of congratulatory background information from the teams. Reps lauded Cleveland sports franchises' generosity to the community and commitment to excellence both on the field and off the field. It was all pretty boilerplate rah-rah stuff. There was even a weird video that showed everyone how cool Cleveland sports can be. Downtown! East Fourth! The "Wave"! It all served to set up the request for more cash money.

Apart from Councilwoman Sunny Simon's inquiry about only extending the sin tax for 10 years (the current issue seeks a 20-year extension), no real financial alternatives were presented.

The resolution to place the sin tax extension measure on the May ballot was referred back to County Council, where it will be read a second time during the next regular meeting. The deadline to get the issue on the ballot is Feb. 5.