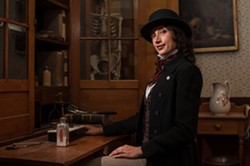 Courtesy of Brandy Schillace
I’m looking at this massive cloth womb encased in glass, and it’s sort of terrifying. It’s a “woman machine,” Brandy Schillace tells me, and it’s based on a device William Smellie used in the 18th century to demonstrate birthing methods. Smellie’s machine is something of a grail for those in the early obstetrics collection game.

“I spent two years, three continents and not a few scary basements looking for the damn thing,” Schillace says. “I felt like Indiana Jones, except I came back with sand and that was it.”

Smellie’s original machine featured lifelike skin, muscle and tissue — all long before the advent of plastics. It even wore stockings. Petrus Camper, an 18th-century surgeon, famously insisted that he couldn’t tell the difference between Smellie’s machine and a real woman, despite the machine having no head.

That’s the brand of off-kilter historical anecdote that Schillace specializes in. She’s the public engagement fellow at the Dittrick Museum of Medical History, and she’s been illuminating these lesser-known niches of our past for curious Northeast Ohio residents.

Schillace never found Smellie’s machine, but she did track down the one on display at the museum now. This one belonged to a female midwife, who wrote a book about the birthing process, although most of her students couldn’t read — hence the machine.

It’s but one of the museum’s 150,000 articles from all corners of the history of medicine. Large exhibits and wooden display cases bring the trial-and-error trajectory of surgical procedures to the average person, most of whom, like myself, have never stopped for a moment to ponder early 19th-century bloodletting protocol.

“You didn’t really want to be sick in 1810,” Schillace says, elaborating on photos of physicians draining copious amounts of blood from their patients. “They had a real misunderstanding of how much blood was in the human body.”

A $400,000 endowment is supporting the museum’s development of “How Medicine Became Modern: A Humanities Perspective,” an interactive digital history exhibit that tracks how we got from there (using leeches as medical tools) to here (sterilized operating rooms). Everything on display at the museum reminds visitors of how far we’ve come and how medical practices, even today, are always a matter of refining the process.

The Dittrick Museum is a house of oddities — and an oddity in itself. Located in a nondescript building on the edge of Case Western Reserve University’s campus (11000 Euclid Ave.), the museum functions as an study center of sorts. An ornate reading room has space for students to work quietly in the looming presence of primitive microscopes.

Still, it’s almost too quiet around these parts. Sitting in the eastside shadow of the Cleveland Museum of Art, Dittrick pulls in only a trickle of visitors most days (outside of school field trips and the like). Schillace wants to change that.

Beginning this week, Schillace is hosting a series of conversations about science and history. She’s inviting the public to get an even closer look at what the museum has to offer. The first talk — “Hard Labor: Birth in the 19th Century and Today” — takes place at 6 p.m. Sept. 24 on the museum’s third floor. Register at dittrickmuseumblog.com.

The series, as planned, runs every other month through August 2016 and features topics like vaccinations, PTSD and the evolution of medicine technology. If the public isn’t already coming to the museum in droves, Schillace’s idea is to take the museum to the public. (Future talks will take place elsewhere, like the Cleveland Museum of Natural History or MOCA.) She’ll speak on a topic for 15 minutes or so before opening the room to general conversation — distinctly not a straight Q&A session, though there will be various experts on hand to keep the convo deep and broad.

“We’re really inviting the public to come in and talk with us,” Schillace says, distinguishing these events from more typical TED-style lectures.

There’s plenty of fertile ground for conversations here; not only has the museum amassed an incredible collection of artifacts and exhibits, but Cleveland as a city is tied to 20th-century medical innovations. The defibrillator, for instance, was invented here. (“The only trick was, your chest had to actually be open for it to work,” Schillace says.)

Through these event and the museum itself, Schillace is finding light-hearted ways to frame grand topics — like the evolution of contraception — in engaging and even humorous ways and connect Clevelanders more closely to the city’s legacy and to the arc of human health.

To keep visitors on their toes, she often begins tours of the museum by asking: “What do crocodile dung, pomegranate and weasel testicles have in common?”

Turns out they’re all ancient forms of contraception. (How anyone first discovered this sort of stuff is unclear.)

“The crocodile dung works — they would make suppositories of that and put it in the vagina as a contraception device,” she explains. “I don’t imagine it did much for your love life, though.”

Such is the daily chit-chat at the Dittrick Museum, one place in Cleveland where it’s impossible not to learn something new.