Do Not Approach Ohio Bears, Police Warn After Several Sightings 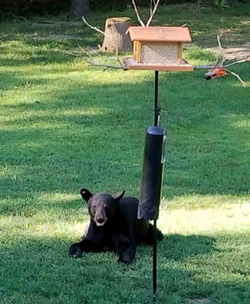 Kirtland Police Department
A black bear who took up temporary residence on Kirtland Chardon Road this weekend.
Some perks of living in Ohio are its general lack of natural disasters and dangerous wildlife. But the Buckeye State is home to semi-threatening black bears, and at least two of them were spotted in Northeast Ohio this weekend.

This prompted the Kirtland Police Department to issue a firm warning to those who might encounter one: "DO NOT APPROACH THE BEAR."

A black bear was also spotted hanging out in Chardon this weekend, and in addition to the seemingly obvious "do not approach" warning, Chardon Police emphasized another one: "DO NOT FEED THE BEAR."

They're not always dangerous — sometimes all it takes to drive them away is a particularly rude cat. Black bears have killed 61 people in the U.S. since 1900, only one in Ohio, and you're more likely to die from a cow attack than a bear attack during the summer.

But you should still be wary of the animals. While each one may look like "a huge teddy bear," according to the Cleveland Zoo, they can still attack.

If you happen to encounter a black bear, you should stay calm, avoid direct eye contact and flee (but not too quickly — you don't want them to chase you).

You can read more about bear safety here.