Ohio law makes it tough for immigrants to drive, but easy for forgers to stay in business. 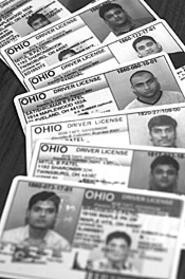 Walter Novak
Fake licenses are easier to get than the real thing.
Remigio Hernandez Ramos dialed slowly. He was nervous about making the call, unsure whether he'd be more relieved if no one answered. The California area code told him where he was calling, but he knew nothing about whom. This person would help him avoid trouble with the law, he'd been told. But he also knew the call could make his situation worse.

When someone answered, "I asked, you know, how can I get paper?" recalls Ramos, a gaunt man whose bony face makes him appear older than his 38 years. "He asked me what kind of paper I wanted. I told him a Social Security card that they can check on a computer."

Six months earlier, in 2000, Ramos had been caught driving without a license in Ohio. When he appeared in court, the judge somehow failed to notice that Ramos was also an undocumented immigrant from Guatemala. But this odd bit of luck created another problem. He was ordered to produce a valid license. Otherwise, his sentence of probation would be upgraded to prison.

Another immigrant passed him the California number, advising him to call immediately, because it would soon be disconnected. After explaining what he needed, Ramos was told to wire $850 for a "starter kit" -- a Social Security card and birth certificate.

And like that, Ramos had his papers. At an Ohio BMV office, he got the driver's license that would keep him out of jail.

Ohio's licensing laws for noncitizens are among the harshest in the nation. Obtaining a driver's license with phony paperwork is a felony punishable by prison time and deportation. But it's a calculated risk that more and more undocumented immigrants seem willing to take. Other states are finding ways to accommodate immigrants who need to drive, without creating new dilemmas. But Ohio's laws are contributing to a lucrative underground market of false identities.

Ohio's undocumented immigrant population grew about 30 percent, to 40,000 people, between 1990 and 2000, the U.S. Department of Homeland Security estimates. Local advocates suspect that number is low.

Whatever the total, Canton resident Ramos is one of them. Seven years ago, he paid $4,500 to a guide known as a "coyote," then spent the next three months walking or riding in cars and trains from Guatemala to the U.S. border.

He picked tomatoes in Alabama and worked as a meat processor in Georgia before heading to Ohio, where he landed a job in the furnace room of a steel plant. All the while, he sent money to the children and father he'd left behind.

Having been caught driving without a license in Alabama, Ramos decided to stay off the roads in Ohio. He succeeded for almost a year, hitching rides to and from work, the laundromat, and the grocery store. But this routine sometimes meant paying "crew leaders," who exploited immigrants' need for transportation. In early 2000, Ramos and three others pooled their money and bought a car.

Getting licenses was out of the question. As do 25 other states, Ohio has long required proof of legal residency in order for applicants to obtain a license. After September 11, legislators raised the stakes. No state wanted to be the weak link in the national-security chain, issuing IDs to terrorists, as an analysis by the National Governors Association noted. But Ohio went further than most. Tucked into a 2002 homeland-security bill were new guidelines that required immigrants to show valid visa documents when applying for a license. Social Security cards and out-of-state licenses were no longer enough. Ohio also became one of three states to brand noncitizen licenses with "non-renewable/non-transferable" in red ink, as well as to rule that licenses would expire along with visas.

If the intent was to make immigrants conspicuous, the approach failed; advocates say that the new system only sends them deeper underground. By demanding so much paperwork, the state misses an opportunity to register foreign nationals, regardless of their visa status, according to Michelle Waslin, a policy analyst at the National Council of La Raza, a Hispanic advocacy group. Which is more important, she and others ask: to deny these immigrants driving privileges, or to know who they are?

"As long as they know where you live and you have a job, you should get a driver's license," says Rey Galindo, a prominent Mexican immigrant who owns Luchita's Restaurant. "It's better to have control of the situation than not, by having all these illegal papers. Because it's very easy to get illegal papers in this country . . . Almost everyone in the Latino community knows a few people with stories of getting false documents."

The California man Ramos phoned was what law-enforcement officials call a document vendor. They are arrested in large numbers across the country, says U.S. Attorney Phillip Tripi. But increasing demand for fake documents keeps both sides busy.

Mark Raimondi, a spokesman for the U.S. Immigration and Customs Enforcement Agency, the investigative arm of the Department of Homeland Security, says that vendors rarely have trouble moving merchandise. "It gets known within a certain community where they can go to get these documents," Raimondi says. Contact information is circulated by word of mouth or through the internet.

Often, the documents are counterfeit. "With today's technology, it doesn't cost a lot to purchase a high-end printer and start creating Social Security cards," Raimondi says.

Counterfeiting isn't always necessary, however; the system is relatively easy to manipulate. A legally licensed driver can request a duplicate license, then sell it. Or an enterprising vendor can find an accomplice on the inside. That's how Manojkumar "Michael" Patel, an Indian immigrant turned U.S. citizen and the owner of the thriving Mike's Convenient Store in Cleveland Heights, did it.

In July 2001, immigration officials in Columbus received a letter in fractured English: "It is sad tosay that mike patel start issuing driving license to elligle immigrant with help of mayfield hts color girl." The girl turned out to be Shalett Morris, an employee at the Mayfield Heights BMV office. According to investigation reports and court documents, Patel would collect $1,300 from immigrants who wanted licenses. He then sent them to Morris, whom Patel paid $400 to falsify the applicants' visa and address information. Before the two were caught, more than 50 people walked out of the office with valid driver's licenses.

An investigator asked Morris why she participated. "I need money for my kids," the single mother replied, according to the interview transcript.

As with the federal version, Ohio's homeland-security bill was passed in a matter of months. Ezra Escudero, executive director of the Ohio Commission on Hispanic/Latino Affairs, has been trying to amend it ever since.

For three years, Escudero has met sporadically with the governor's office. He brings up Michigan, which also requires proof of legal residency for a license, but is flexible with the kinds of documents immigrants can show.

There is no consensus on how to treat driver's licenses for immigrants. The California legislature may soon grant such licenses, once applicants pass criminal background checks. The U.S. Congress is considering a bill that would recommend, but not mandate, guidelines for all states.

National security plays a role in all these debates. "There's still a strong notion that the driver's license is a national identity card -- that there's nothing wrong with you, that everything's in order if you have received one," Escudero says.

But even the National Conference of State Legislatures admits in a report that "the best driver's license system will not and cannot stop terrorism." Several of the 9-11 hijackers held valid driver's licenses, in their own names and with their real addresses.

Even law-enforcement officials acknowledge that most immigrants obtain licenses illegally for reasons that are far more mundane.

"It's becoming more prevalent with officers out on the road -- they're coming into more contact with drivers without a license or with a fake license," says Lieutenant Heidi Marshall, Chardon post commander for the Ohio Highway Patrol. "In order to go to a job, they need to drive."

Many immigrants who obtain licenses even purchase car insurance -- something few in the criminal-justice system noted about Ramos after he was pulled over again in early 2002. This time the court convicted him of forgery and tampering with records, both felonies. Then immigration officials began deportation proceedings. Ramos has applied for asylum; his hearing is scheduled for January. In the meantime, he gets a ride every day to his desk job in Canton.