Dumb as Rocks: Q Renovation Will Do Precisely What Leaders Feared 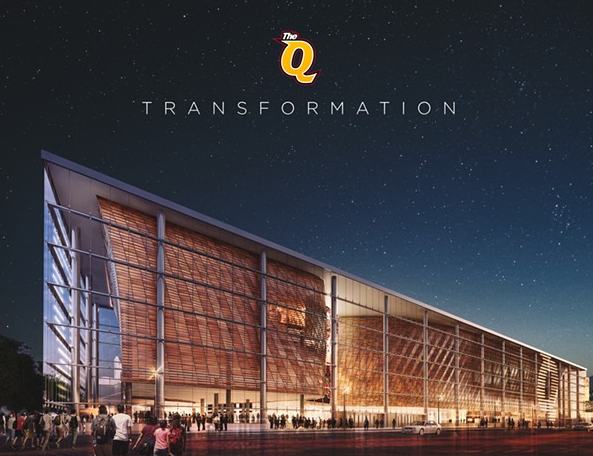 Courtesy: Cleveland Cavaliers
Given the calamitous, jaw-dropping stories exploding daily from both the administrations of Cuyahoga County Executive Armond Budish and Cleveland Mayor Frank Jackson — to whom one longtime political observer recently referred as "Tweedledee and Tweedledum" — it might be tempting to look upon the upcoming completion of the Rocket Mortgage Fieldhouse as good news.

The temple formerly known as Quicken Loans will officially re-open on Sept. 30 for a concert by the Black Keys. And two days earlier, it'll host an open house for the public.

This should not be celebrated. It should be mourned as the murder of democracy it will always represent.

A story last week in Crain's demonstrates once again just how thoroughly the Cavs deceived the public as they swindled them for something like $160 million, after interest. Comments from Cavs leadership articulate — quite without remorse — that one of the arena's big goals is to compete with marquee local event spaces, including the Huntington Convention Center, and with nearby bars and restaurants.

These were fears that county council members explicitly fretted over before they greenlit legislation to fund the massive expansion anyway.

Councilman Jack Schron, for example, one of the few elected officials who subjected the Cavs presenters to anything resembling legitimate questioning, noted with some alarm that among the Q’s significant upgrades was an increase in floor space, from about 90,000 square feet to more than 150,000. This would make the Q a much more attractive venue for private events, Schron understood.

The Cavs CEO, Len Komoroski, confirmed at the time that the Q would be seeking and hosting many events in the space, both public and private. Schron, then, asked why it made sense for the county to contribute $16 million to fund a competitor that would directly undercut the business of the Convention Center and the Global Center, also funded by taxpayers and already struggling. Komoroski said the Q would be aiming for different, unique events.

But the Crain's piece reports the opposite. The Rocket Mortgage Fieldhouse will now have 22 "meeting, banquet, hospitality and event spaces" that will be used to try to increase the 1,400 private events that the arena already annually hosts.

"I think people think of convention centers and hotel ballrooms for more corporate-style meetings," said Brooke Bockelman, the Rocket Mortgage Fieldhouse's VP of Booking and Events. "But this gives us the opportunity to put our name in the ring."

In other words, they are doing precisely what they said they wouldn't, competing for the same sorts of events that the Huntington Convention Center and Global Center for Health Innovation would hope to attract. Money in hand, there is now no need to disguise their true intentions, evidently. The Cavs told Crain's that they have been working with Destination Cleveland to attract these events and had even brought in a sales staffer specifically focused on convention and banquet business.

One of the other fears expressed by County Council was that the Q would "cannibalize" local small businesses. Councilwoman Sunny Simon worried that new dining options and larger social areas inside the arena would impinge on business at nearby bars and restaurants before and after games.

Those concerns, too, were waved away. In some cases they were flatly denied. When Scene examined preliminary budget numbers in May, 2017, we sought to address Simon's concern. The Cavs told us in no uncertain terms that there would be no new restaurants in the new square footage.

"There are no new restaurants planned in the new square footage," communications director Tad Carper wrote in an email. "Might add a new coffee area, but that is still yet to be determined."

And voilà! The Crain's piece explains in further detail:


The arena will have what the Cavs call eight "destination hospitality areas" — from newly created neighborhoods to expanded atrium areas and the new-and-improved Loudville — that feature 16 spots where fans can order food and beverages or just hang out. There will also be six higher-end club and membership spaces, and all 62 of the FieldHouse's suites will have been redesigned.

What an absolute travesty that money which might have been spent improving the conditions of Cleveland's roads or paying for the increased compensation of corrections officers at the county jail has instead been deployed to redesign all 62 of the FieldHouse's suites. Cleveland's Living Room indeed!

These new hospitality areas, which include dining options from some of Cleveland's hottest restaurateurs, will be ideal for customizable "mix and mingle" events, Bockelman told Crain's, events that local bars and restaurants would surely have hoped to attract:

"The Overlook Bar provides elevated views of the glass curtain that envelops the arena, plus cool shots of downtown. Such spots can be ideal for 'people who are looking for that wow factor," Bockelman said."

The biggest wow factor throughout this entire debacle is that anyone believed these inveterate liars for one second. The Cavs said what they had to say to squeeze as much money as possible from this impoverished region, and then they promptly proceeded with what they intended to do all along.