E11even 2 Celebrates Its Anniversary and Debuts New Exhibition This Thursday 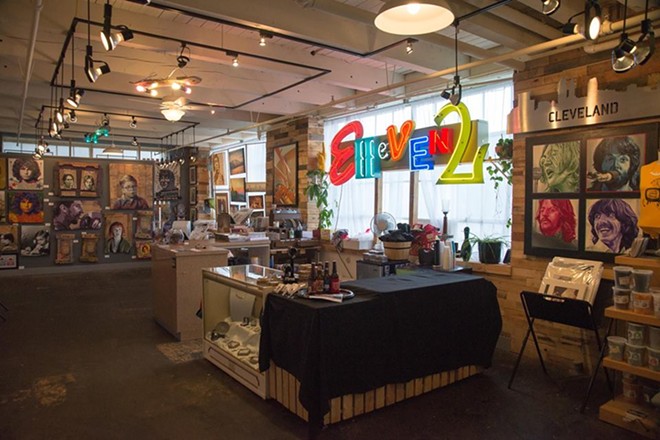 Originally, these exhibitions were all installed on one wall of the gallery, with an eclectic collection of the owners’ artwork hung salon-style throughout the rest of the space. When the tenant next door moved out of the space in the summer of 2015, the gallery expanded into the vacated space next door, doubling in size. The addition now houses the gallery’s rotating exhibitions, while the original space features a less frequently rotating collection of the owners’ paintings, photography and mixed media pieces.

“There have been some tweaks and improvements along the way, but our concept from the start has been pretty much the same,” says Nainiger. “We have always had a combination of rotating shows and constant personal work from Tina, Rich and myself. We had 12 exhibitions a year at the start. We now do six shows per year, which gives us a bit more attention to each specific show and allows us to have an opening and a closing exhibition. Our second space is now dedicated to the now-larger rotating shows, and gives us a little more breathing room to display our own work.”

Known for its fun and inviting atmosphere as much as its themed exhibitions, E11even 2 features several unique elements you won’t find at most galleries. These elements include a converted cigarette machine that now sells art prints and a human-sized garden gnome dressed as John Lennon from Sgt. Pepper’s Lonely Hearts Club Band, located next to each other just outside the gallery. Inside the gallery, the owners began photographing local celebrities who visited during monthly Third Fridays and special events.

“About a year ago we purchased an Instax instant camera, today's Polaroid,” Sadowski says. “As celebrities (local or national) come through the doors, we try to get them to pose for a picture, sign it and we add it to our ‘Faces of e11even 2’ book. Many of the local celebrities are friends of ours and artists, but we have had the pleasure of meeting many others. In the spring, we had a private acoustic performance by Brian Vander Ark from The Verve. That was a great experience.”

After nearly four years, E11even 2 is celebrating its anniversary early with E11even 2 Day, appropriately taking place on Thursday, November 2. From 6 to 8 p.m., as well as a preview of its next show, Ratio 1:12, opening next week during November’s Third Fridays open studios. The show features all new work by Cihlar, Nainiger and Sadowski. Guests will receive 10 percent off any purchase made during the preview party.

For Ratio 1:12, each founding artist is exhibiting 12 works. Cihlar has created a series of sunsets at different times of the year featuring the same subject, one of the Guardians of Transportation from the Lorain Bridge. Nainiger’s contribution is a mixed media collage series themed around the months of the year and each month’s unique color palette, specifically related to Cleveland weather. Although Sadowski works with Cleveland imagery more frequently than Cihlar or Nainiger typically do, she is the only one of the show’s participants with work not featuring a Cleveland theme.

“For this show, the boys focused on Cleveland while I am showing a new body of black and white images from Nevada,” Sadowski says. “I traveled west in March, and while at El Dorado Mining Town, photographed the front grills of several cars that are part of their collection.”