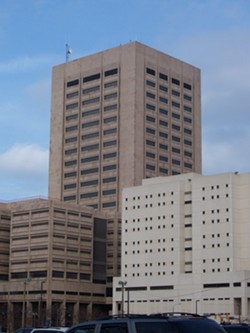 Photo courtesy of Aivazovsky via Wikimedia Commons
Kenneth Blackshaw — his six-foot-something frame in orange prison scrubs, hair shot through with grey, hands bound by cuffs — was led into Judge Maureen Clancy’s courtroom this morning on the 20th floor of the Justice Center. News cameras pointed from the jury box. After the East Clevelander had finished shuffling to his seat at the defense table, Blackshaw's lawyer Terry Gilbert turned to the bailiff.

"Does he need the handcuffs on?" Gilbert asked. "He's getting out today." From across the courtroom, Cuyahoga County Prosecutor Tim McGinty jumped to his feet, gliding up personally to the court guards to explain they needed to unshackle Blackshaw.

That cooperation was more than symbolic this morning. After two years and change into a five-year run at the Lake Erie Correctional Institute on drug charges, Blackshaw will be released today. His indictment and subsequent guilty plea were the product of some cowboy East Cleveland detectives currently waiting for federal sentencing on corruption charges. The gears are working toward clearing two other men linked to the same bad cops, who federal prosecutors say stole money and extorted drug dealers.

Blackshaw's case is also a proud talking point for McGinty's administration. The three East Cleveland cases are the first motions to vacate pushed forward by McGinty's Conviction Integrity Unit (CIU), an internal team at the prosecutor's office responsible for exploring claims of innocent. As Scene recently pointed, although the prosecutor formed the unit in April 2014, until this week they had yet to recommend an exoneration.

Flagging the importance of the occasion, McGinty was on hand this morning in Clancy's courtroom, flanked by Jose Torres, the CIU's head man. In a brief hearing, the county prosecutor addressed the judge himself.

"We move the court to vacate the conviction and set aside the sentence for the reasons in our brief," McGinty said, explaining that the move was for "the sake of justice."

He added: "We seek justice, which is the release of this individual."

When speaking to the court, Blackshaw's attorney acknowledged that although the defense had known about the indictments of the East Cleveland cops since last fall, McGinty's office worked with the defense to untangle Blackshaw's case.

"I would like to extend my appreciation to the county prosecutor and the court," he said "It's not often that defense lawyers and prosecutors work together . . . it worked out pretty well."

The three East Cleveland cops netted in the corruption scandal — Antonio Malone, Torris Moore and Eric Jones — have pleaded guilty to corruption charges in federal court. The bad cops' fingerprints, however, are still all over two other convictions — John Wallace and Hosea Lock. Following the hearing, Joe Frolik, a spokesman for McGinty's office, told Scene motions were going forward to vacate those convictions as well.

Establishing the CIU was one of the top priorities for McGinty after the former judge first settled in behind the big desk at the prosecutor's office. To date, the unit has fielded 88 requests for review. Of those, 16 moved through the initial screening, and eight were pending as of two weeks back. The three cases tied to East Cleveland rogue cops no doubt were counted in that tally.

CIUs are popping up all over the country, contributing to the overall pattern of increased national exonerations. Still, the allegation aimed at many is that they're more window dressing than actual good-government: half of the 24 CIUs in the country have not even pushed forward an exoneration. Cuyahoga County now has moved out of that category — which is good.

Still, you'll have your skeptics about the unit's current batting average. While McGinty and Torres spoke to a clutch of media types this morning following the hearing, two lawyers, unaffiliated with the case and just passing through, grumbled as they headed for the elevator.

"'Conviction Integrity Unity'," one snorted. "How about the We-Fucked-Up-Bad Unit," the other chimed in.